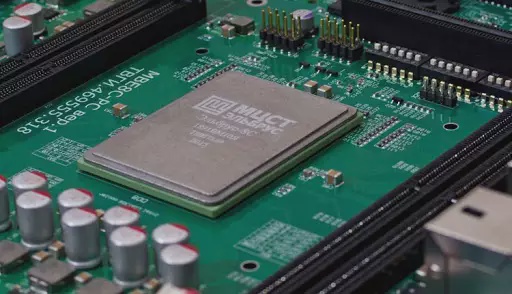 Not long ago, we did an episode on a line of CPUs that were not made by AMD or Intel, but rather by an AMD-backed Chinese joint venture just for the Chinese market. But these aren't the only alternative desktop and server CPUs out there. Russia also got in on the fund some years back, and it appears the company behind it, MCST, in case you can't read Cyrillic, is once again producing a line up of CPUs called, Elbrus. So why are they doing this and how exactly are they different from more traditional offerings. To answer, we collaborated with our friend, Doctor Ian Cutress of Anand Tech, and we'd like to give him a big thank you and a sloppy kiss for his help.

So like China, Russia is interested in completely controlling the silicon that goes into its processors. They want to avoid potential backdoors from chips designed outside the country, namely AMD and Intel, and maybe even put in a few backdoors of their own. The Russian government has put in orders for lots of Elbrus chips and is even forcing some of their own departments to use them.

But other than being Russia controlled, What make them distinct? Well, probably the biggest thing is that they're designed using a VLIW, or very long instruction word architecture. Don't you just love how engineers name things? Anyways, what this means is that when you write a program for an Elbrus chip, you pack several operations into one instruction. Meaning the way that CPU runs is more parallel than your average  x86 core, that's probably sitting on your desktop or laptop right now.

In fact, AMD had some mainstream graphics cards several generations ago that ran on a VLIW like architecture since parallel processing is more efficient for graphics operations.

This does make an Elbrus CPU more difficult to code for, especially as the hardware has a much more difficult time deciding on its own what the most efficient order to execute instructions in would be. This is called out of order processing, a key feature of virtually all modern x86 CPUs. It also means that general performance for something like just running an operating system, isn't as good as what you'd get on a modern x86 chip.

Although Elbrus can run x86 based OS and programs through a hardware translation, you're only looking at performance of about 80% of what you'd get with a comparable x86 processor, and that's best case.

But they're designed this way for a couple of reasons. One, a chip that's hard to code for ultimately gives Russia more control over its own hardware. Two, Elbrus chips are expected to have lots of uses in government supercomputers to model things like weather and military applications. Uses that are more specialized, meaning that MCST isn't as concerned about general performance. MCST is also the only major company that makes Elbrus  motherboards, and it looks like it will remain this way for the foreseeable future. Meaning, it's going to be very difficult to get your hands on an Elbrus chip if you live outside of Russia.

Inside the country, the Russian Powers, RP envisioned the chips becoming widespread in government, medicine and education. And although there are variants for plain old desktop PCs in these industries, the big focus is on servers and enterprise level deployments. And since they're not trying to really compete with AMD and Intel in the traditional sense, Russia looks like it will be fine with the process nodes being a little behind.

Elbrus currently uses the 28 nanometer process, with an eight core model costing around 1700 US dollars. However, they are looking at coming out with a 16 nanometer, 16 core model in 2022, with a seven nanometer, 32 core chip two or three years after that.

Can Memory DAMAGE Your CPU?

Why CPU Sockets CHANGE So Much