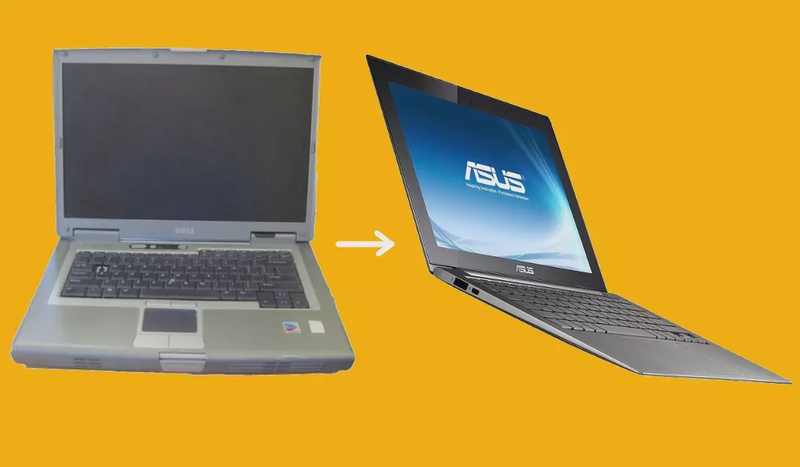 If you were born before the late 90s you probably remember a time when laptops were heavy clunky power hogs with the elegance of a cinder block.

But these days the cine quinone of laptop marketing seems to be an emphasis on how thin light and portable everything is. And somehow this is all without compromising on performance. We're even seeing laptops that are light enough to pick up with just two fingers, yet come with high-end processors displays and storage solutions. So how did we get from there to here?

First let's look at the most important components, integrated circuits like CPUs.

The transistors that make up a CPU are called MOSFETs, and they have special physical properties that allow them to be easily scaled, meaning that for a long time manufacturers were able to squeeze more and more of them onto a chip, increasing processing performance  to a point these higher performance CPUs didn't need additional electrical power as long as the size of the actual package stayed about the same. But more efficient processors aren't the only reason that our laptops are so light.

that feed the CPU with power have also gotten smaller, by gradually moving towards higher switching frequencies. Here's what that means, for power to get to your CPU without frying it the voltage has to be stepped down. Small components like inductors do this by storing small amounts of energy stepping it down and releasing it to the CPU a certain number of times every second, and it turns out the physics behind this process allow higher frequency inductors to be made smaller, which saves both space and weight in a compact device like a laptop.

Even printed circuit boards, you know the green layer that everything is mounted on, have changed. The improvements here are harder to see with the naked eye, but they make a big difference. Modern laptops use high density interconnects, meaning that copper traces go through the PCB in multiple layers, this allows manufacturers to pack more connectivity into a smaller lighter space.

We've also seen improvements from increased manufacturing expertise both from past experience and with better tools for predicting outcomes. Nowadays, manufacturers can run pretty accurate simulations on exactly what various design ideas are going to do to thermal output. This reduces the chance that bringing the components closer together is going to cause overheating in the finished product.

Of course, we'd be remiss if we didn't talk about improved chassis and battery technology. On one hand shrinking connectors have made it so you don't have to have a thick design just to accommodate that gigantic printer port.

But there's more to it than that. Many laptops have switched to using alternative metals, like lightweight magnesium alloys that you'd find in HP's dragonfly Li book. Metal such as these are chosen not only for their lightweight but also for their relative strength, meaning that they're not just used for the outside but also for internal brackets that hold components in place. Manufacturing the chassis, like the components inside, has also gotten more precise with advancements in techniques like CNC and thixomolding

which involves heating magnesium into a slurry and then precisely injecting it into molds to create components of different shapes and sizes.

We've also seen a whole scale shift away from old-school nickel cadmium and nickel metal hydride batteries. These were reliable and hearty, but also didn't hold as much energy per unit of weight. Nowadays many laptops use lithium ion and lithium-ion polymer batteries which don't need to weigh nearly as much to hold lots of power. They've existed for many years, but growing demand for lightweight devices has led to following prices making them more and more common.

Of course there are still trade-offs inherent in buying an ultra-thin laptop they still face thermal challenges that larger machines with better air flow do not. Meaning, that they can't be packed with the fastest Hardware on the market I mean that's why gaming focused laptops still exist and tend to be larger and heavier. But for everyday use the sleek and lightweight machines that we have today are going to satisfy the majority of users.

Lenovo C340 Review - Should You Buy A Chromebook?

Why are laptop charger cables not standardized