Why does Bitcoin still stand up to so much bad news?

Bitcoin price remains above $20,000, in stark contrast to the usual movements when the cryptocurrency market receives a series of bad news.

From the beginning of July 14 to now, the Bitcoin price has almost always been trading above $20,000 per coin, at one point nearing $21,178. Starting at midday yesterday, the world's largest cryptocurrency held steady above $20,500 a unit, up nearly 5% in 24 hours. This is the 5th day in a row that the Bitcoin price has been on an uptrend.

Along with Bitcoin, other digital currencies also increased sharply. Ethereum had a time of up to nearly 10%, surpassing the important $ 1,200 mark as at the beginning of last month. Even the VGX coin of the bankrupt lending platform Voyager Digital has more than tripled in the 3 days of July 12-14. According to data from CoinCapMarket as of yesterday afternoon, out of the 100 largest cryptocurrencies by market capitalization, only 7 have dropped in the last 24 hours. Green color covered the electricity board with at least 14 dong increasing in price with a margin of approximately 10% or more.

The somewhat "calm" market movement on Bitcoin and cryptocurrencies in general contrasts with previous price corrections. In early May, Bitcoin fell from the $40,000 threshold to $30,000 after the collapse of the Luna and TerraUSD duo. By the end of June, this currency continued to retreat to the $20,000 price zone after the US Federal Reserve ( Fed ) raised interest rates by 0.75% - the biggest increase since 1994. Then, Bitcoin price bumpy according to bad news such as digital currency lender Celsius Network in crisis, hedge fund Three Arrows Capital (3AC) default...

But for the past week or so, the cryptocurrency market has seemed immune to all bad news. On July 13, the US Department of Labor announced that the consumer price index (CPI) of the country in June increased by 9.1% over the same period last year, reaching a 40-year peak. Right after that, investors were whispering about the fact that the Fed is likely to raise interest rates by 1% at the end of the month. On July 14, Celsius Network filed for bankruptcy, following in the footsteps of Voyager Digital exchange and hedge fund 3AC.

The uptrend of cryptocurrencies also went against the red color covering US stocks . The S&P 500 index fell 0.3% on July 14. The Dow Jones Industrial Average lost 0.5% while the blue-chip index also posted a five-day losing streak. Although stocks recovered in the last session of the week, all three representative indexes went back compared to last week. The S&P 500 fell 0.9 percentage points, the Nasdaq fell 1.6% and the Dow Jones lost 0.2%. This development goes against the previous close relationship of digital assets and the US stock market.

Sharing with VnExpress , Mr. Le Sy Nguyen - Southeast Asia manager of Bybit, said that it was the previous series of bad news that made the current cryptocurrency market "immune". The bad news no longer affects the user's psychology too much. Particularly, the Fed's interest rate hike was expected, so it no longer had much impact on the psychology of crypto investors.

More importantly, the green color in the cryptocurrency market comes from the fact that they have had a very long downtrend before. Bitcoin alone has dropped more than 70% since its peak of $69,000 last November.

“So many people believe that Bitcoin has almost bottomed, even further down to 10,000 USD and there will be a recovery after a long drop, so many people have started buying to accumulate,” a representative of a One of the largest cryptocurrency exchanges in the world commented.

Another argument to explain the "calm" this time is that Bitcoin and cryptocurrencies in general have built the trust of users in the past time. The most obvious manifestation is that many famous financial institutions and individuals have entered the market and bought in large quantities. Digital assets have also proven themselves in times of crisis and war like in Ukraine, where people can only use Bitcoin and cryptocurrencies for transactions. 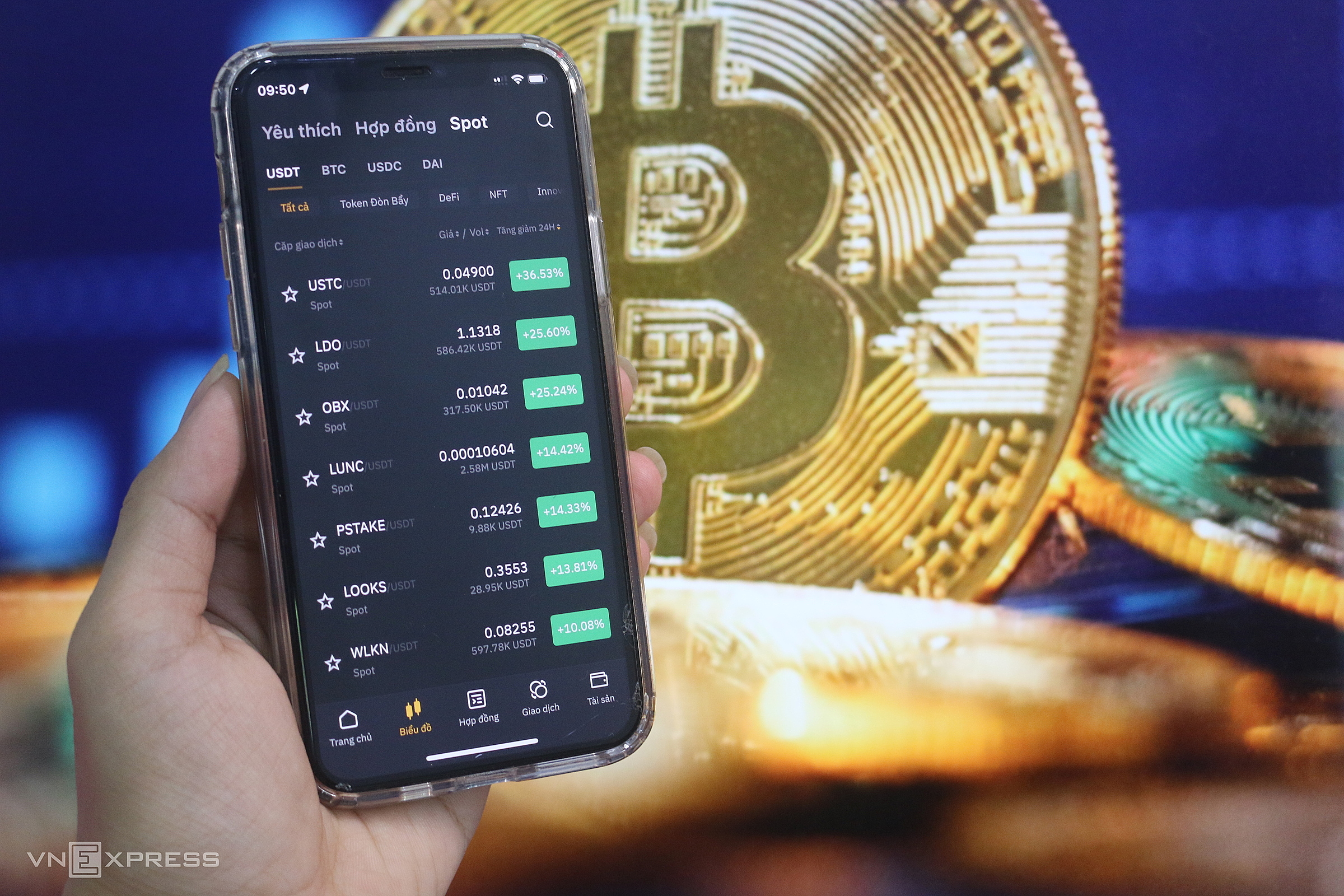 The green color dominates the cryptocurrency market despite facing a lot of bad news. Photo: Siddhartha

CNBC also surveyed many crypto investors to find answers to the somewhat "weird" market performance of cryptocurrencies . The majority of investors believe that the improvement in macroeconomic factors and the purification in the market can be important factors contributing to the Bitcoin price movement.

US inflation is hitting a 40-year high , making the Fed more tough on monetary policy, but there are some signs that it could peak. According to Vijay Ayyar, vice president of international and corporate development at cryptocurrency exchange Luno, the market will find a bottom as soon as there are signs that the economy and inflation are "under control".

“If we see the above signs this month or even in the next few months, that should give the market confidence that risk assets including stocks and cryptocurrencies are bottoming out.” he said.

According to James Butterfill, head of research at CoinShares, a "softer" Fed and peak dollar strength could help the market find a bottom. Butterfill said that the weaker economic outlook could cause the Fed to slow down the monetary tightening process. He believes this is likely to happen at the annual Jackson Hole convention later in the summer.

Another factor that keeps the cryptocurrency going is the purification that is taking place in the market. Hedge fund co-founder ZX Squared thinks the market is in the process of weeding out weak players. He was no longer surprised by news of crypto companies collapsing and emphasized that it could help the market find a bottom.

CoinShares' Butterfill says the pool of Bitcoin miners that are losing money is also a factor in purifying the market. He also believes that when crypto miners are inefficient and wiped out, it will be easier for the market to determine a bottom.

Looking at the technical chart of the entire market over the past time, Matthew Dibb - co-founder of Stack Funds, told Fortune that he has seen "strong gains" in decentralized finance (DeFi) coins. The market seems to be building momentum for a future growth.

In case you have found a mistake in the text, please send a message to the author by selecting the mistake and pressing Ctrl-Enter.
Read also: Epic Real Estate Investing listen online, Life Beyond Fitness hosted by Austin Current listen online, The Bitcoin Boomer Show listen online
1