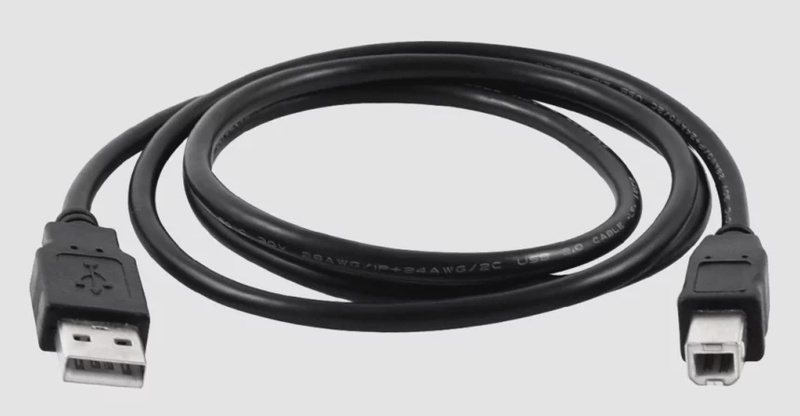 The U in USB stands for universal, which is appropriate seeing as how USB devices are everywhere. I mean, you can even get a USB turret to shoot Nerf projectiles at your irritating coworkers.

But one common annoyance is that there's been a plethora of USB connector types over the years, making the experience not quite as universal as we'd like.

What's so special about USB where we can't have the same connector on both ends of the cable? I mean, Ethernet, HDMI, and good old RCA jacks figured it out, so why can't USB?

Take a look at this this thing, which you'll probably recognize if you've ever plugged in a printer over USB.

This is called a USB Type-B connector, and unfortunately if you've ever needed one of these cables in a pinch, there aren't a whole lot of other devices that use it, meaning you probably don't just have one lying around. To add insult to injury, printer manufacturers usually don't include a Type-B cable in the box, meaning you have to go out and buy one yourself. So is this some kind of big racket by the electronics industry to suck more money out of you? Well, maybe not.

A fundamental difference between USB and some of those other connection types we mentioned earlier is that USB carries power, hence why so many USB gadgets don't need to be plugged into the wall separately. But providing power on the same cable as data has the drawback that connecting things the wrong way can lead to damaged devices or other electrical hazards, so the powers that be designed USB so that you'd always have an upstream and a downstream device with power only flowing in one direction.

As part of this design process, different connectors were created for upstream and downstream devices. The typical rectangular USB Type-A connector that you're used to seeing is usually on devices that provide power.

This is why you'll often see them on gadgets that you plug into the wall, like desktop PCs and charging bricks for your smartphone. The other end is often something different on purpose so that people won't try to connect two Type-A ports together.

So if, for example, you've ever wondered why you can't just send data between two computers by connecting them with Type-A to Type-A, this is a big part of the reason why.

Of course, the standard Type-B that you see on a printer or something like a monitor with a USB hub, or a desktop DAC for you audio people, is fairly bulky, so the Micro-B connector became pretty common for small devices, like smartphones, that receive power.

You can even see this on your typical power bank, where you plug in the full-size Type-A connector when using it to charge a phone, but instead plug in a Micro-B connector when you're recharging the power bank itself.

Micro-B was further revised once USB 3.0 was released, as we saw these very funky-looking connectors hit the market.

That extra lobe on the side enables more data to be carried, making the connector compliant with higher USB 3.0 speeds. But in my opinion this connector sucks. They break easily and I don't like plugging them in. Ugly. Of course, with the launch of USB Type-C, which you can see here, it's more common now to find a C-to-C cable, as the USB-C actually supports having two devices negotiate to determine which will be the host that provides power.

Although this was possible with previous USB connectors with a protocol called USB On-The-Go, support for it was inconsistent.

However, because many USB-C devices need to connect to older hardware, C-to-A cables should still be commonplace for a long time. But do know that the days of juggling connectors should be numbered. In the meantime, you can always use your printer wirelessly.

How To Format USB Flash Drive On A Mac

Apple Is So Far Behind With Lightning Connector