High density polyethylene (HDPE) pipes for irrigation in Kenya by Grekkon Limited are manufactured and supplied in various diameter sizes and thicknesses for irrigation, and civil works purposes. These HDPE pipes are UV treated to slow UV degradation during use, particularly in our tropical climate where UV radiation is high. The company’s technical team advises on the required specs, and also conducts installations for growers.

The pipe diameter size determines the volume of water channeled through the pipe, so that the larger it is, the greater the volume water flowing through. A pipe is 100M long for 16mm, through 110mm, after which, the length decreases to 50M, then 6M for the very large diameter pipes.

The HDPE pipe wall thickness determines the amount of pressure that the pipe will hold. The higher it is, the greater the amount of pressure it will hold. Besides withstanding higher pressure, thicker pipes have a longer lifespan. The importance of thickness in HDPE pipes is more pronounced than in say PVC pipes because the former often run on the surface during use- exposing them to elements, while the latter are usually sub-surface during use.

Pressure Nominal, abbreviated as PN is a term used to describe the pressure that a HDPE pipe will withstand. A pipe’s PN number describes the nominal pressure in bars that it will withstand at 200 Celsius. 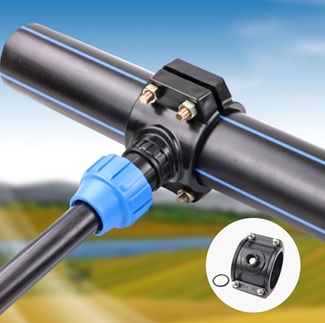 PS: Elbows are either 450, or 900 according to the preferred angle

Wamae Mwangi is a director at Grekkon Limited- Irrigation Hub

Hire an SEO Expert in Lahore!

Types Of Pipes Used In Irrigation

Types Of Pipes Used In Irrigation

What are the common connections of HDPE drainpipes?