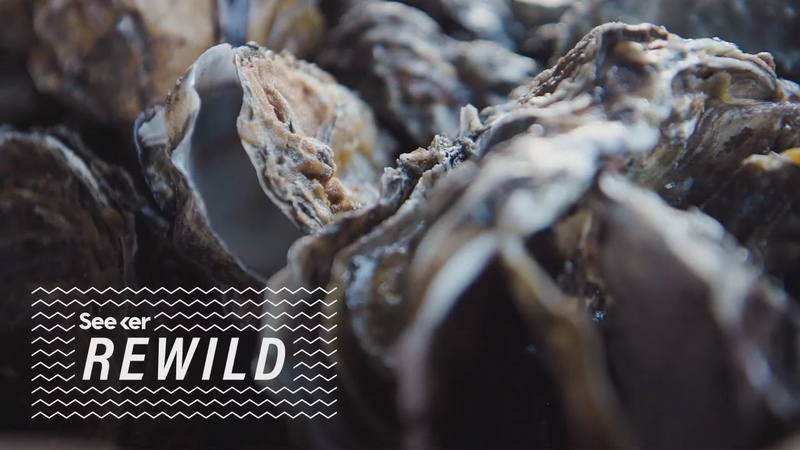 This small shellfish has a superpower. Not only can oysters make pearls out of grains of sand and taste incredible on the half shell. They can also completely transform their environment.

One oyster can filter up to 50 gallons of water in a single day, leaving it cleaner and healthier. These amazing shellfish are like the natural cleaning crew of the ocean. But ocean acidification and other climate-related changes are threatening oyster populations, which could be problematic for their entire ocean ecosystem.

The world's oceans work like a giant sponge soaking in heat energy and carbon dioxide from the atmosphere. And while this may actually help to mitigate some of the effects of climate change on land that extra heat and CO2 is affecting the natural chemical balance of the ocean. And so all that carbon dioxide that we put into the atmosphere, about a third of it goes straight into the ocean. And that carbon dioxide is fundamentally changing the chemistry of the ocean, and that's the phenomenon that we call ocean acidification.

And how this acidification or change in the ocean's pH balance is going to impact the ocean's smallest creatures is a major focus of Dr. Hill's research.

So what we see in laboratory experiments that we've done here at the Bodega Marine Lab is that the more and more acidic the water gets, the stronger negative response you get from animals. Animals like oysters and mussels tend to grow smaller, thinner shells.

25 miles down the road from Dr. Hill's lab, oyster farmer Terry Sawyer was noticing something similar with his oysters - that they were dying at higher rates, and at the deaths were in correlation with high acidification of the water where they were growing. So when Terry and Dr. Hill met at a conference, something clicked.

So Dr. Hill and I were like looking at each other like wait... Dr. Hill is based out of Bodega Laboratory just in the north of here 45 minutes away, we're here, we're in the water all the time. We do a lot of thinking about sort of how to translate that work from what we know about the native oyster to the oysters that they are growing at the farm.

With the resources and daily data Terry and his team are able to gather in the farm, they're able to track in real time how water chemistry is impacting oyster yields, which obviously benefits Terry's business, but can also lead to a greater understanding of the world's marine life. And what that data is showing is that the high carbon dioxide levels are making it difficult for oysters to grow their shells.

And if oysters can't grow strong shells many won't survive to maturity, which means a blow to the oyster economy, but also to the health of our oceans.

Lowering of the pH. the acidifying of the water is directly related to the amount of CO2 that's produced by the anthropogenic activities, burning of fossil fuel, CO2, greenhouse gases, etc. All of these things are being produced by a lot of activities we have.

What happens is the carbon dioxide mixes into the surface water of the ocean and forms carbonic acid. This then dissolves into bicarbonate and a whole bunch of extra hydrogen ions. It's these hydrogen ions that cause the real problem here.

Marine bivalves like oysters combine the calcium ions and the carbonate ions into solid crystals of calcium carbonate that they use to form their shells, but hydrogen ions from the dissolved CO2 in the ocean have a tendency to bond with the carbonate ions, leaving fewer available for the newly spawned oysters.

The vulnerable stages of any organism are at the larval stage. And so if you start affecting how hard it is for that organism to live. In this case for an oyster to build a shell, then that's going to lead to problems with it being able to be a viable organism.

Basically, the more energy the oyster has to waste competing with hydrogen ions for shell material, the less energy it has for growing big and strong. It can also result in a weaker shell, so that shell now is compromised where it's too thin or breaks easily, then it can no longer seal itself out, seal that that poor water quality out and they will not be viable.

Terry and Dr. Hill are also working together to actually simulate future water conditions in the lab, in order to try to predict what may happen to oysters in the coming decades,

We built almost a decade ago, built an experimental setup that kind of operates like a time machine. We can dial in today's carbon dioxide values in a tank. And then in the tank next door we can actually ramp it up and maybe put the carbon dioxide concentrations that you'd see in 100 years with acidification levels rising 30% since the Industrial Revolution, it's critical to be tracking the problem now, and try to work on how to be ready for the future.

Oftentimes when you hear about ocean acidification, it seems like this sort of distant chemical problem that the ocean is experiencing. And if you go to Hog Island Oyster Company and you have, you know you're sitting at a picnic table and you have lunch sitting in front of you, all the sudden we can talk about ocean acidification in a way that's about a family business, and a coastal economy, and the food on our plates, and a future that we want for our kids.

This data from the lab and the data collected by instruments placed at the farm itself, all help Terry address acidification by knowing precisely when the pH differences lead to high mortality rates. From this, he can figure out which oyster strains are more resilient than others. But this won't solve the problem outright. In the end it all comes down to the carbon dioxide that's blasting nonstop into the atmosphere and getting soaked up by the ocean.

I think ocean acidification is a problem that we can confront and change the course of the problem. So, just like the other issues that we are dealing with climate change, the fundamental issue is our carbon dioxide emissions. More people need to be aware of this and what has change look like. It actually means a lot of changes in our behaviors. And that means everything from efficiencies, on how we run our heating systems to producing electricity as to how we get around. And I think the other part of this is just know that the collective energy would have an amazing impact. And I think that's really the important part is that there is something that people can do

What Evidence Do We Have for Life on Mars?

Draper, the underwater drone that scans the ocean for microplastics