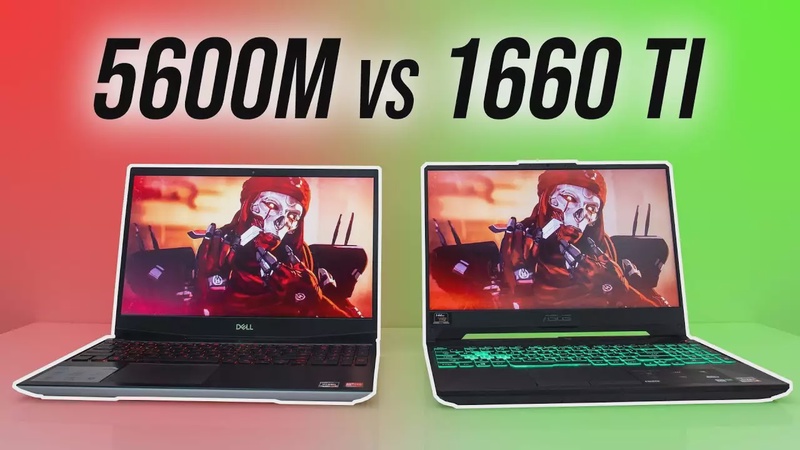 Which graphics should you get in your next laptop? The Nvidia GeForce GTX 1660 Ti, or the Radeon RX 5600M from AMD? In this comparison we’ll take a look at the differences in 20 games and applications to help you decide which is worth it, the results are way closer than I was expecting.

These are the differences in specs between these two options.

Both have 6GB of GDDR6 memory at same speeds. The 1660 Ti is NOT Max-Q and runs at the maximum 80 watt power limit for the GPU. I’ve been told by AMD that the 5600M will run between 60 and 95 watts in the G5 depending on the workload, and this is a result of smartshift.

I’ve chosen these two laptops because they both otherwise have the same Ryzen 7 4800H processor and 16gb of memory in dual channel at the same speed.

The G5 is the first laptop to offer smartshift, and basically this allows it to dynamically adjust power between the processor and graphics depending on the workload. It’s not possible to disable this, and given the 5600M only exists in the G5 right now, I can only test with it enabled.

so it makes sense to compare the 1660 Ti given it’s the next level down in Nvidia’s lineup.

Both laptops were tested with all Windows updates applied, and latest drivers from both Nvidia and AMD were used at the time of testing, the G5 has it’s own driver branch which is why this may not look like latest.

With that in mind let’s start with the gaming results.

Red Dead Redemption 2 was tested using the game’s built in benchmark. I’ve got AMD’s 5600M shown by the red bars, and Nvidia’s 1660 Ti shown by the green bars. The 5600M was coming out ahead of the 1660 Ti at all but ultra settings. At ultra settings the 1660 Ti had the biggest lead out of any game tested at max settings, but I’d argue with these lower frame rates it doesn’t matter too much.

Battlefield 5 was tested running through the same section of the game in campaign mode on both machines. This time the 5600M was only ahead in average FPS when it came to the low setting preset, the 1660 Ti was otherwise ahead, though it was less than a 2 FPS lead at ultra.

Borderlands 3 was tested using the games benchmark. This time the 1660 Ti was ahead at lower setting levels, however the 5600M pulled out in front at ultra and above, well at least for average frame rate, the 1% low performance was much lower comparatively, where the 1660 TI was 45% higher in that regard at max settings.

Control was tested running through the same section of the game on both laptops. The 5600M was ahead in more cases than not, it has the lead in average frame rate regardless of setting levels, but was a little down in terms of 1% low at medium and high settings.

The Division 2 was tested with the built in benchmark. The 5600M was ahead in all instances this time around, granted once we get up to the ultra setting preset it’s basically performing equivalently to the 1660 Ti for all practical intents and purposes, however the 5600M had a larger 10% lead at low settings.

Apex legends was tested in Season 5 with the world’s edge map by running through the drill site. The 1660 Ti was ahead in this one, though not too surprising as I’ve found this title to favour Nvidia in the past.

Call of Duty Modern Warfare was also tested with either max or minimum settings. This time the RX 5600M was ahead in all cases. At max settings it saw the biggest gain for the 5600M out of all 20 games tested with a 17% higher average FPS.

Ghost Recon Breakpoint was tested using the built in benchmark, and it flips things around as it was one of the better results for the 1660 Ti, especially when looking at the 1% low performance at ultra settings which was 42% higher, though this could be different with Vulkan.

Shadow of the Tomb Raider was also tested using the games benchmark. The 1660 Ti was 6% faster when it came to the highest setting preset, otherwise though, the 5600M was ahead at all setting levels and had a 19% higher average frame rate at lowest settings.

Fortnite was tested using the replay feature with the exact same replay on both laptops. The 5600M had a clear lead at low settings, the 1660 Ti took this back at medium and high settings, then maxed out at epic the two are extremely close together. The 1660 Ti is less than 1 FPS ahead when looking at the average, however it had a 6% higher 1% low.

PUBG was also tested with the same replay on each machine. This has been a title that I’ve found to favour Nvidia graphics in the past, and that seems to also be the case here too. Like some other games, the 5600M was doing better at lower settings, but the 1660 Ti has the win in most configurations.

Far Cry New Dawn was tested using the games benchmark tool, and in general the 5600M seems to be doing better. Yeah at most settings the 1660 Ti is one to two FPS ahead on average, but the 5600M has much better 1% low performance between low and high, by the time we get to ultra they’re about the same in that regard, quite close in any case.

Monster Hunter World was tested running through the main town on both laptops. The 5600M was doing better in this one, the only time the 1660 Ti was ahead was just slightly in the 1% low at max settings, otherwise the 5600M was in front. M

etro Exodus was tested with the built in benchmark, and this was another test that was performing a bit better with the RX 5600M, which was ahead both for average and 1% lows at all setting levels.

CS:GO was tested with the Ulletical FPS benchmark. The 5600M was outperforming the 1660 Ti at max and medium setting levels, though the 1660 Ti had an edge when it came to all settings at minimum.

Dota 2 was tested playing in the middle lane. Again like CS:GO, the 5600M was ahead at all but the lowest setting level, though even at low the 1660 Ti was just 1.5% ahead in average FPS, so nothing major.

Assassin’s Creed Odyssey was tested with the built in benchmark, and the results were a little mixed. The 1% low with the 5600M was clearly ahead regardless of setting level, though the 1660 TI was ahead in average frame rate at high and very high settings, though only by less than 3 FPS.

Rainbow Six Siege was also tested with the built in benchmark using Vulkan, and this one was a massive win for the 5600M. At max settings the 5600M was 14% higher in average FPS, but at low settings it had a massive 40% lead, the largest difference out of all games tested, meanwhile the 1% low was 68% higher.

Overwatch was tested in the practice range as it allows me to perform the exact same test run, perfect for a comparison like this. This was another where the results were mixed. The 5600M had the superior frame rate at low and high settings, otherwise the 1660 Ti was in front, though at these sorts of high frame rates I doubt most people would be able to tell the difference.

The Witcher 3 tends to be more GPU bound in my experience and offered some interesting results. The 5600M was ahead in the 1% low at all setting levels, otherwise in terms of average FPS it was very close between medium and high settings, the 1660 Ti had a bigger lead in average frame rate at low though.

On average out of the 20 games tested at the highest setting level, which is typically most GPU heavy, the Radeon RX 5600M was 0.2% slower than the GTX 1660 Ti, so on average they’re basically performing the same.

As you can see though, the results can vary significantly one way or the other depending on the specific game.

Things get a little more interesting when we instead look at the lowest setting levels, typically where the processor matters more.

This time 5600M had a larger 7% higher average frame rate when compared to the 1660 Ti. I think this is a result of smartshift, at these lower setting levels the processor should be able to get more power as the GPU needs less. The A15 on the other hand just has more static power limits regardless of the workload.

I’ve also tested FireStrike and TimeSpy from 3DMark, and in these tests the 5600M was beating the GTX 1660 Ti by decent margins.

The results could vary significantly based on the particular test, however it appears that the 5600M is winning in more tests than not.

I’ve used the Puget systems benchmark for Davinci Resolve, and the GTX 1660 Ti system was scoring a fair amount ahead of the 5600M.

while the 1660 Ti was scoring much better when it came to the Adobe Premiere test.

The 5600M is still new, so hopefully these software suites get better support for it in future.

but given the 5600M only currently exists in the G5 I’ve gone ahead anyway.

The 1660 Ti was running 8 degrees Celsius cooler in this workload, but what I found interesting was that this was despite the 1660 Ti system drawing more power from the wall.

To be fair, the 5600M system was using more than the 1660 Ti initially, but I took these numbers after sitting in the game for 30 minutes once things like boosting should have settled down.

If you recall both GPUs had near identical performance in Witcher 3 game in terms of average FPS at max settings too. In terms of driver issues, I didn’t have any crashes with either, but with the 5600M I will note that by default Vulkan games would try to run on the Vega iGPU. This was an easy fix though, you just need to set them to high performance mode in the Windows graphics settings, however this wasn’t an issue with the 1660 Ti machine, so that felt like a more polished experience, but this could easily change with future updates.

For the final difference, the price. The Dell G5 with these specs that I’ve tested here is $1200 USD on the Dell website, but the entry level model starts at $880, or $800 on a sale I recently saw, which is quite attractive as you still get the 5600M GPU. The ASUS TUF A15 with GTX 1660 Ti seems to go for around $1000, so when comparing apples to apples with the same Ryzen 7 4800H processor and memory the A15 does cost less money, and as we saw in games at max settings it was performing very closely to the 5600M on average at max settings, though at low settings levels the 5600M had a more consistent lead in games.

I’ve started testing the 4600H G5, and so far the results are looking very impressive for the price, so compared to an ASUS TUF A15 that may only have a 1650 Ti for that price, the 5600M should blow it away. I think the $800 G5 with 5600M is going to be a big seller for the amount of performance on offer, but more on that soon. There are of course other important differences to factor in when comparing these two laptops, like the low response time screen in the A15. For now let me know which of these two GPUs you’d pick and why down in the comments.