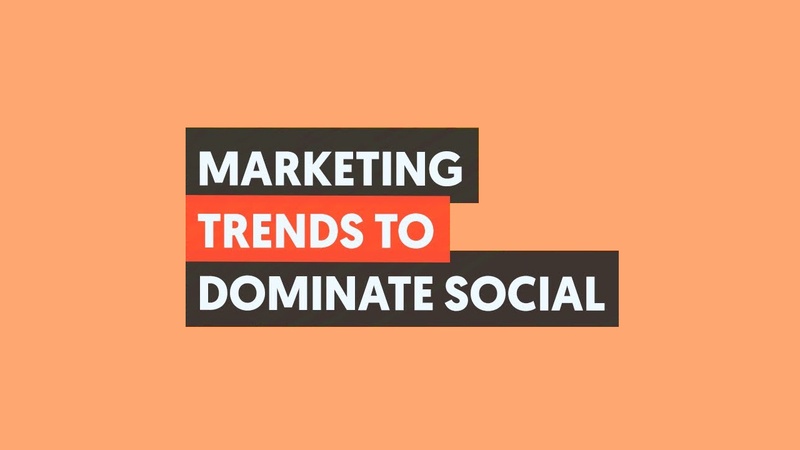 Out of all the marketing spaces out there, social media is the one that changes the most every year, and it changes so drastically. And look, if you're going to follow advice from one or two years ago, it's not really going to work in the future.

So what's the big first big change? It's, Stories, are going to continually grow. Whether it's Snapchat, Instagram, Facebook, or WhatsApp, everyone loves, Stories. It's funny, my friends always make fun of me, because when they release stories, always send them, the default, 100, or confetti, or congratulations, on Instagram. And I always click it just to show them that I'm paying attention, and I'm supporting whatever they're doing. Short, quick attention spans, that's all we have. Did you know the average human has a shorter attention span than a goldfish, I kid you not, a goldfish. Hence, Stories work really well, because that way you can interact and engage with people super fast.

According to Hootsuite, 64% of marketers either have already incorporated Instagram Stories into their strategies, or plan to. So you need to really get into Stories. Even YouTube has recently added Stories to its platform. And it's going to be something that the default on all social platforms that come about, even the new ones that emerge that haven't launched yet, everyone's going to be into Stories. So make sure that you're leveraging them, and you can use the same story for all the platforms out there, so it'll just be more efficient for you.

Facebook's big, Instagram's big, they've dominated a lot of the social channels in the last few years. But platforms like TikTok are taking off at record rates for youth communities. Business platforms like LinkedIn do really well for the B2B category, or the business world. There's all these niche platforms that are coming about. Some of them are old, some of them you heard about, but more people are really going into these niche communities. Just like Pinterest is wonderful for interior decoration, and fantastic if you're targeting the female demographics. So you need to look at these niche networks, and not just push them out and be like, oh, no one's on Pinterest, it's not that popular. It's still a multibillion-dollar publicly traded company.

If you're not paying attention to these niche channels, you're not going to do well. And here's the thing, if you already created content for one of them, you can repurpose that content and put it out everywhere, right? Just look at all the channels out there. For example, there's Twitch, that's a gaming social network. It's super popular, it's now $1 billion plus company that's owned by Amazon. Over 560 billion minutes of Twitch were watched in 2008. I don't have the stats for 2019 or 2020, but that just shows how popular Twitch is, because it's even grown to be more popular since then. That just shows you that this niche social networks are becoming more and more popular.

See, at my ad agency, we get a lot of people talking to us, being like, "I'm doing e-commerce, were doing really well "on Facebook ads and Instagram ads, "we want to now get into Google adverts." This is the opposite, years ago it used to be people like, "I started with Google adverts, "now I want to figure out Facebook." People are now starting with Facebook and social ads, because social commerce is so big when it comes to Instagram. There's all these companies build on Instagram and social media. You know Kylie Jenner? She ended up selling 50% of her company for over $600 million. Why, because she leveraged her social media platform to sell her beauty line. That's how powerful these social sites are when it comes to selling commerce online. So for that reason you need to push hard, especially if you're in the e-commerce world, on social media, and have these influencers talk about your product. That's the power over brand, just look at the Kardashians.

I was watching CNBC the other day, technically I watch CNBC almost every single day, and there was someone from Sequoia Capital, and I believe his name was pronounced, Roelof. And Roelof was talking about how he's really big on want to invest in an augmented reality or virtual reality company. This stuff hasn't taken off yet, but you see Snapchat really pushing hard on this, Facebook's pushing hard on this, and although it's not fully there, it's going to become more and more popular in the future.

76% of Americans shop online, and this trend is going to continue to grow. We're used to going to physical stores and malls, we also do it as a way to interact with our friends. But just imagine, in the future what's going to happen is we're going to all put on these virtual reality devices, and were all going to be with our friends, and seeing them, and were going to shop in a fake version of Louis Vuitton, that's virtual reality, and we're going to be able to interact with each other just like we were if we were in a mall with each other and all of our friends. That is going to happen, believe it or not, in the next few years.

Data privacy is all-time high, and these social networks have so much data on people it's getting scary. So much so that governments are stepping in, you're seeing big fines in the billions of dollars, not millions, I'm talking about billions with a B. It's already becoming really hard to get in front of the right audience, because of these government regulations being like, hey, you can't only show certain people these kinds of real estate ads, or these apartment ads, you can't discriminate. Look, there's so much privacy information that we're all concerned about, you bet the government's going to step in. So you need to be more careful with the data that you're pushing out, what you're collecting on people, because last thing you want to do is breach any of these rules. And it's not just on a country by country basis, now in certain regions, like the United States, each state has their own rules when it comes to privacy.

Facebook has recently made huge steps with their platform, Horizon, which is essentially a virtual reality world where you can explore and create in an AR community. They've also released their own version of Alexa, called Facebook Portal, where you can watch videos, and audio calls with friends, view photo albums, display birthday reminders and all this kind of stuff, and weather information. So you can interact with other people, and take that networking off from just, hey, on facebook.com, into your day-to-day life. We're now in a role where video is everything. Video is going to become more popular than text-based stuff, everyone's going to want video-based content, because they have these mobile devices, and they have these broadband networks that are coming into place, where videos just happens so fast it's just going to become the norm.

Video content will dominate any other form of content. If you have text-based content, you've already found on Facebook, doesn't do as well as video-based. But it's not just Facebook, all the other networks from LinkedIn to TikTok, to them wanting live video, this is all going to take off. So if you're not focusing on creating video content more than text-based content or audio-based content, you're going to lose. Video is everything. According to Cisco, by 2020, 82% of all online content will be video. If you're not in video, it's now the time. Big brands are doing it, you need to do it, you have the edge, this is the time. Do it before your competition.

Can Social Media Still Bring You ANY Website Traffic in 2020

The Two Marketing Careers That Will CRUSH IT in 2020