There is a definite functional relationship between terminal voltage and current. It is a two-terminal device that reflects the ability to transform electrical energy into other forms. It is represented by the letter R and the unit is ohm Ω. Actual devices such as light bulbs, heating wires, resistors, etc. can all be expressed as resistor elements.

The resistance value of a resistor element is generally related to temperature, material, length, and cross-sectional area. The physical quantity that measures the magnitude of resistance affected by temperature is the temperature coefficient, which is defined as the percentage of the resistance value that changes when the temperature increases by 1°C. The main physical characteristic of a resistor is to transform electrical energy into thermal energy. It can also be said that it is an energy-consuming element, and internal energy is generated when current passes through it. Resistors usually play a role in dividing voltage and current in a circuit. For signals, both AC and DC signals can pass through resistors.

A two-terminal electronic component made of resistive materials with a certain structure and capable of limiting the flow of current in a circuit. The resistance that cannot be changed is called a fixed resistor. Variable resistance is called potentiometer or variable resistor. The ideal resistor is linear, that is, the instantaneous current through the resistor is proportional to the applied instantaneous voltage. Some special resistors, such as thermistors, varistors and sensitive components, have a non-linear relationship between voltage and current. Resistors are the most widely used components in electronic circuits, usually in different series according to power and resistance, for circuit designers to choose. Resistors are mainly used to adjust and stabilize current and voltage in circuits, and can be used as shunts and voltage dividers, and can also be used as circuit matching loads. According to circuit requirements, it can also be used for negative feedback or positive feedback of amplifying circuit, voltage-current conversion, voltage or current protection component when input is overloaded, and can be formed into RC circuit for oscillation, filtering, bypass, differentiation, integration and time constant Components, etc. 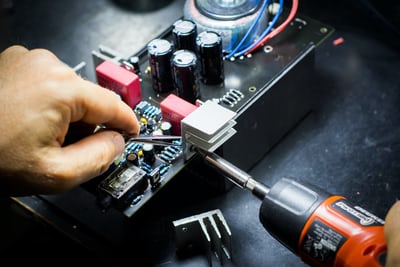 What is a resistor? What should be paid attention to when selecting resistors?

How to Calculate Resistor Value?

How to choose a fixed resistor？