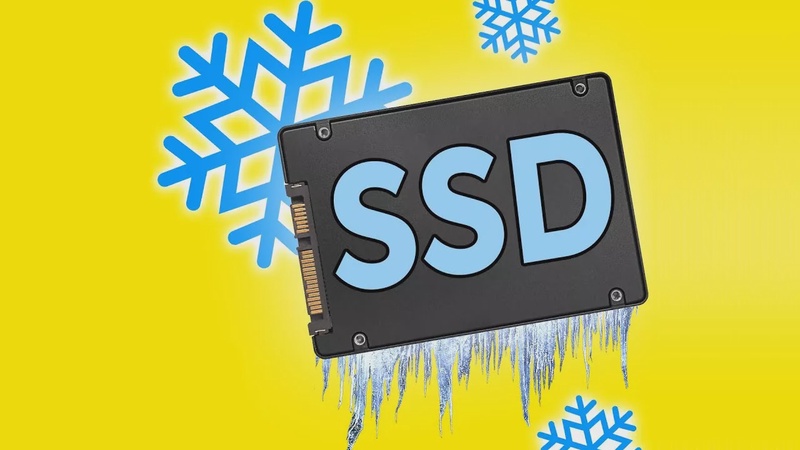 The conventional wisdom is that if you have a computer, you wanna keep it as cool as possible, and this has spawned an enormous industry dedicated to drawing the heat away from important components like graphics cards and processors. But there's been some controversy lately about whether one important piece of your system, the SSD, should be cooled, as some folks say that this can actually shorten its lifespan. But how could this be? And is there any truth to the claim?

To find out, we spoke with Tim Schulte, Pranav Kalavade and Johnmichael Hands over at Intel, and we'd like to thank them for their time and insight.

So part of the concern comes from the way that electrons flow through an SSD. You see, the NAND flash that makes up your SSD actually gets damaged every single time you write to it, meaning that solid-state drives have a finite lifespan. But it turns out that at higher temperatures, electrons can actually flow more easily through the NAND flash, causing less damage, hence the concern about cooler temperatures hurting an SSD drive.

But is this really something the average person needs to worry about? I mean, if you look at a typical SSD's spec page, they're rated to run at some pretty low temperatures, as low as around 0 degrees Celsius, the point at which water freezes. And even as a Canadian, I doubt that most of you are operating your computers in the middle of a blizzard for long periods of time.

Also, it turns out that while people have expressed concerns about drive longevity at low temperatures, cooler environments can actually be beneficial in other ways, like for data retention, since the electrons that store data won't move around as much. So I guess it's about finding the sweet spot then?

Turns out the best idea is to just keep your SSD away from temperature extremes on either end of the scale. For example, Intel SSDs tend to be rated to work between 0 and 70 degrees Celsius, so as long as you're not too close to either of those limits, you shouldn't see a noticeable effect on either longevity or on performance. And the best way to do this is, you guessed it: use a heat sink. You don't need anything fancy. In fact, many modern motherboards come with a small cover for your M.2 drive that's little more than a hunk of metal with a screw hole, and that'll work perfectly fine for the vast majority of folks.

It turns out there is a significant difference, about 5 to 10%, in terms of thermals between having no cooling and simply having something to cool things down a bit. And if you have a 2.5-inch SSD, well, it shouldn't need any extra cooling at all because it probably has a metal casing that doubles as a heat sink. Just make sure that that casing gets a little bit of airflow inside your case.

On a related note, the only time you might have to worry about temperatures, again, assuming you aren't operating the SSD for long periods in some kind of freezer, is if your PC case is getting little to no airflow because of broken fans or intakes that are clogged up with dust. That could push temperatures past the rated operating range. Realistically, the biggest thing that might bottleneck your SSD in the near future isn't temperatures, but rather the fact that the M.2 connector itself doesn't support enough power to handle the speeds that we can expect from upcoming PCI Express 5.0 drives. But that's another topic altogether, so for now, just make sure that your SSD gets some airflow and that you use the heat sink that came with your motherboard if you have an M.2 drive. You don't have to take it any further than that. I mean, there's a reason that they don't make SSD water blocks...

Alex in Hardware
22 May