Which Apple Watch Should You Buy in 2020? Buyer's Guide! 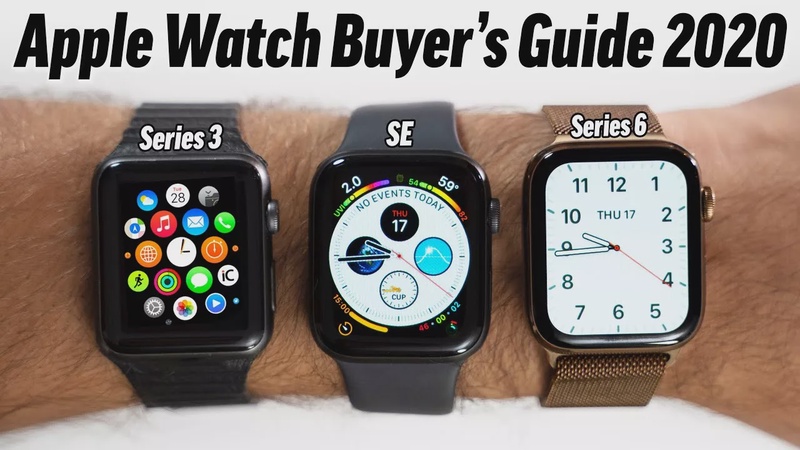 As you guys know, Apple just had their annual September Event where they released their new Apple Watch Series 6, and they did something this year that they usually don’t do. They released a budget Apple Watch SE model alongside the premium Series 6. And to make choosing a new Watch even harder, they’re continuing to sell their Series 3 model, which is now on Sale on Amazon for only $169, making it $110 cheaper than the Apple Watch SE and $230 less expensive than the Series 6.

The point is that it’s probably never been more tough for new Apple Watch buyers to choose the right model for your needs and your budget, or potentially for your child thanks to the new Family Setup feature which I’ll get into later in this review. So what I’m going to do is explain every single difference between these 3 Apple Watch models, and then I’m going to recommend one for each different use-case, doing my best to make sure that you don’t make any purchasing mistakes.

The difference between the 3 Apple Watch models, the biggest visible change is the available finishes. The Series 3 just gets Silver or Space gray Aluminum, while the SE adds Gold Aluminum.

But the Series 6 goes all out, adding two brand new aluminum finishes, blue and Product RED. On top of that, you can choose unique Stainless steel or Titanium finishes, but those models are priced much higher than the others.

The Se and Series 6 also come with a case that’s 11% thinner than the one on the Series 3, so it helps them feel a bit more premium. But by far, the most important difference that I think holds the most value is the fact that the Series 3 uses the smaller legacy display that is squared off

while the other two has larger displays with rounded corners which feel much more modern and make it easier to read what’s on the display.

Another interesting point is that while the Series 3 supports some of the new Watch faces, it’s limited to a smaller version, like the Fire watch face, and there are a lot of new Watch Faces that are only available on the Series 4 or newer Apple Watch models.

Another difference is found on the back, with a ceramic and sapphire crystal back on the Series 6 and SE instead of composite for the Series 3

and as you can see, the new back looks more modern. That’s also because the new Watches come with the second-gen optical heart sensor, a better accelerometer that can measure up to 32 g-forces which allows it to enable the fall detection feature, which can automatically notify a designated contact or authorities if it detects a fall and no further movement.

The new SE and Series 6 also get a built-in compass, an always-on altimeter, a speaker that’s 50% louder, haptic feedback built into the digital crown, 32 GB of storage instead of only 8 GB on the Series 3, and a better microphone which enables the Noise monitoring feature.

In terms of spec differences, they both get LTPO displays which are more efficient, they both get Apple’s updated W3 wireless chip which is also more efficient, they both get Bluetooth 5.0 and perhaps the biggest deal is the fact that the Series 3 cannot be configured with LTE, so it has to be in range of your iPhone or using Wi-Fi at home. This means that the Series 3 doesn’t get international emergency calling, but it does support Emergency SOS only if your iPhone is nearby. The Series 6 and SE can do this by themselves if you buy an LTE model. And because of that, you can use Family Setup, which means that you can set a Watch up without requiring an iPhone, which is perfect for kids.

In terms of performance, the Series 3 comes with the S3 chip, the SE gets the S5 chip and the Series 6 gets the S6 chip. We found the S3 chip to be a little bit slow, with the S5 being perfectly smooth, so we’re not sure if the brand new S6 chip is going to make that big of a difference in the Series 6.

Surprisingly, all 3 of these models have the same 50 meters of water resistance, they can all notify you of any heart rate discrepancies, and they all have the same 18 hours of rated battery life. As far as the bands, they all support the same bands, even the new Solo Loops, but since the case on the Series 3 is slightly smaller, you should probably order a slightly larger band to account for the difference.

Before we finally get into the Apple Watch Buyer’s guide, there are a couple of features that are exclusive to the Series 6 that I want to mention. It of course, gets the always-on display, which stays dimly lit instead of simply shutting off when in standby mode, and it’s now 2.5x brighter than on the Series 5 when in always-on mode. It also gets the exclusive ECG test feature and the brand new Blood Oxygen measurement feature, which can be a huge deal for people with health issues.

On top of that, it’s the very first Apple Watch to support the 5GHz band Wi-Fi connection, and it’s the first to get Apple’s new Ultra Wideband chip which could enable some really cool features in the future. So there you guys go, there are all of the differences, and with that, let’s get into the Buyer’s Guide.

If you’re someone who really cares about the fashion aspect of owning an Apple Watch, and you don’t really have a limited budget, then the Series 6 is probably the best choice for you because it comes in the largest variety of finishes, so you can for example, get a Gold Stainless steel case and a matching chain link band which looks very premium. On top of that, the Series 6 supports the Always-on display, making it look more like a real watch when you’re not using it. And of course, it comes with the best specs and all of the new unique features like ECG, Blood Oxygen monitoring and the U1 chip. But I’d say that if those features don’t really matter to you, and you’re looking for the best bang for your buck, the Apple Watch SE is probably the best choice because it packs the same design and almost all of the same features as the Series 6.

The most important one is the larger display with rounded corners which makes the biggest difference for day-to-day use. The S5 chip isn’t as fast, but in our experience, it performs very well and doesn’t limit you in any way like the Series 3’s S3 chip does. It also gets the same 2nd-gen sensors, 32 GB of storage and improvements like the better speaker and microphone.

If you simply just want a basic Apple Watch for the absolute best price, especially if you just want it to track your heart rate and other metrics for fitness and workouts, you really can’t beat the $169 sale on Amazon. You can still use all of the same bands, but you’re limited to the silver and space gray aluminum finishes. You don’t get the full selection of Watch Faces, but you probably don’t mind if you’re going with the model. You don’t get the best specs, like for example, Bluetooth 4.2, the older W2 chip and just 8 GB of storage, but that probably doesn’t matter much to you if you just need a simple Apple Watch for a great price.

However, there is one major mistake you need to avoid if you’re considering the Apple Watch Series 3. If you’re thinking of getting it as a gift for an elderly person or if you’re buying it for your child to take advantage of the new Family Setup feature, the Series 3 is not going to cut it because it doesn’t support LTE cellular service, so they will have to have an iPhone to set it up. This new feature is absolutely great if your child is not quite old enough to have their own cell phone, but you still want to keep track of their location and be able to call them at any time, knowing that they can pick up your phone call right from their wrist. And for that, the new Cellular model of the Apple Watch SE is the absolute best bang for the buck, starting at $329, since service providers charge significantly less per month to connect a cellular smartwatch compared to a dedicated smartphone line. And your kids will also get the added benefit of all of the fitness features which can help encourage them to exercise.

But if your child has certain health issues, it may be a good idea to get the Series 6 model to take advantage of the blood oxygen monitoring and ECG testing features, but that does bring the price up to $500 instead of $329 for the Apple Watch SE.