AMD’s new Ryzen 9 4900HS has quite a lot of processing power available, but just how well does it stack up against Intel’s best 8 core laptop chip and others? Let’s find out!

These are the key spec differences between these processors.

The Intel i9-9980HK is the only other 8 core CPU in this comparison, however unlike all of the others, it’s unlocked and can be overclocked, of course assuming thermal and power limits permit.

The 9980HK has double the cache of the 4900HS, a higher power limit, and higher single core turbo boost speed.

As the i9 is unlocked, I’ve done my testing with it undervolted by -0.15v, overclocked, and I’ve also boosted the power limit, though I found in practice CPU only workloads would run at about 90 watts. It’s also worth considering that the i9 is pretty much only available in thicker 17 inch laptops, there are some 15 inch ones, but I tested mine in the Gigabyte Aero 17, whereas the 4900HS I’m testing with here is in a much smaller than usual 14” ASUS Zephyrus G14.0 Just for a little perspective, I’ve also got results from the Intel i7-9750H from my Lenovo Y540, i5-9300H from my Y7000, and the best from AMD’s last generation, the Ryzen 7 3750H from the ASUS TUF FX505DU. 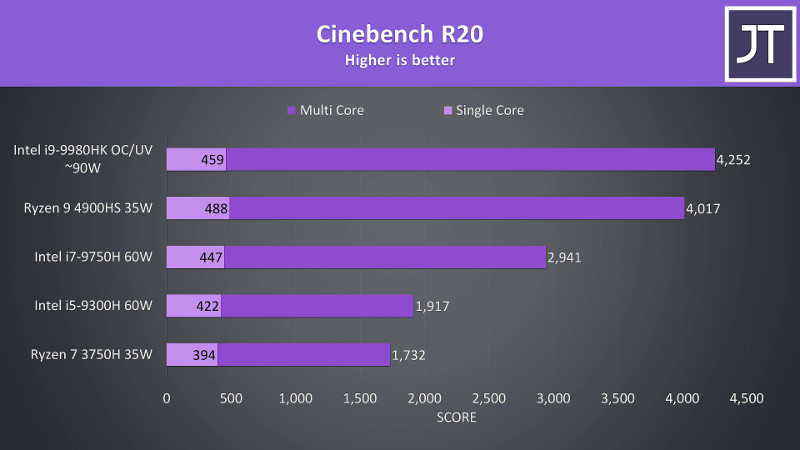 Starting off with everyone’s favourite Cinebench R20, we can see that the i9 was able to hit a 6% higher multicore score, though to be fair the 4900HS could score similarly for it’s first couple of runs before the boost period expired. The 4900HS can run at 60 to 65 watts, but it settles at 35 watts long term.

Anyway the 4900HS is leading the pack when it comes to single core performance, something Intel has historically been considered best at. 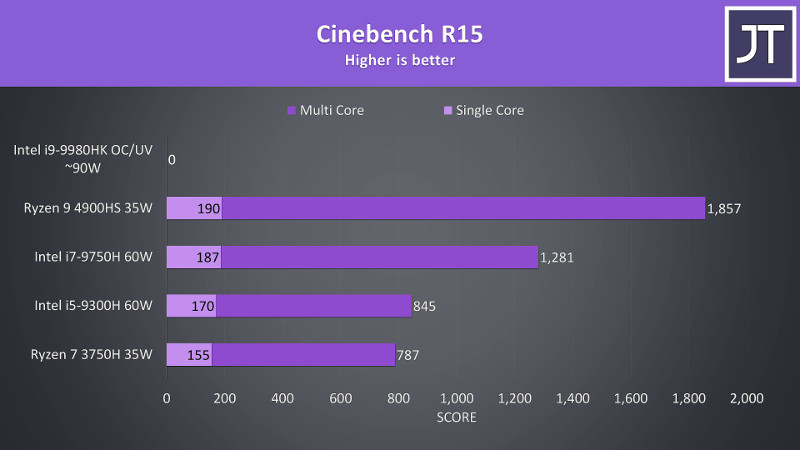 I’ve also got some older Cinebench R15 results for those that still use it, but unfortunately I didn’t test out the i9 with this benchmark when I had it, so we can see how the 4900HS stacks up compared to other chips, however we’ll move right along. 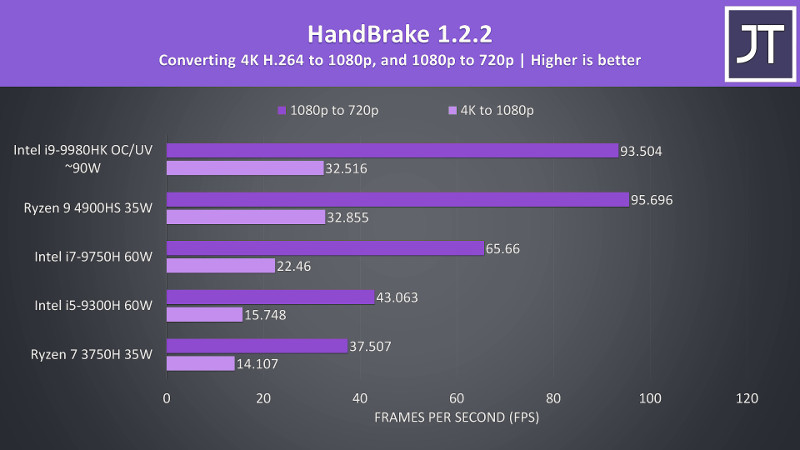 Handbrake was used to convert a 4K video file to 1080p, then a separate 1080p file to 720p. In this transcoding test, the Ryzen 9 4900HS was actually faster than the i9, which is honestly quite an impressive achievement. Either way though the results were close, and both of the 8 core systems have nice leads over the other processors in the comparison. 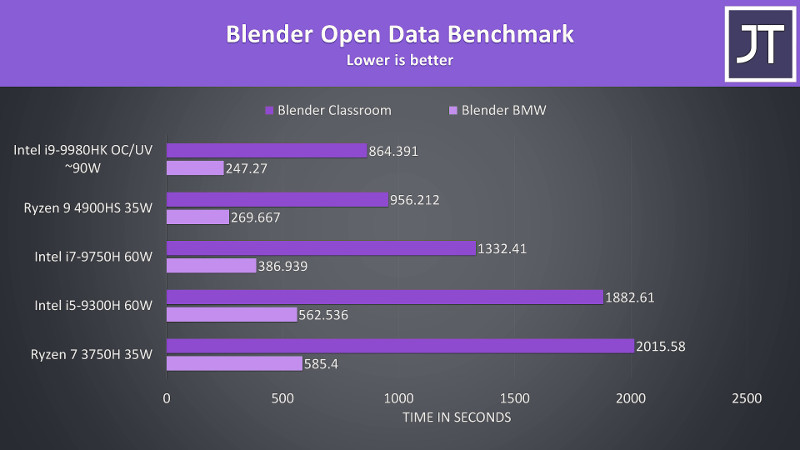 Blender is another threaded workload that prefers more cores. This time the i9 was about 10% faster in the Classroom test, and about 9% faster for the BMW test. Although the 4900HS is behind, this test takes a lot longer to complete than the other tests, so the 4900HS is actually running at its 35 watt limit for most of the test, I’ll show you a bit later just how power efficient it is, the results are pretty surprising. 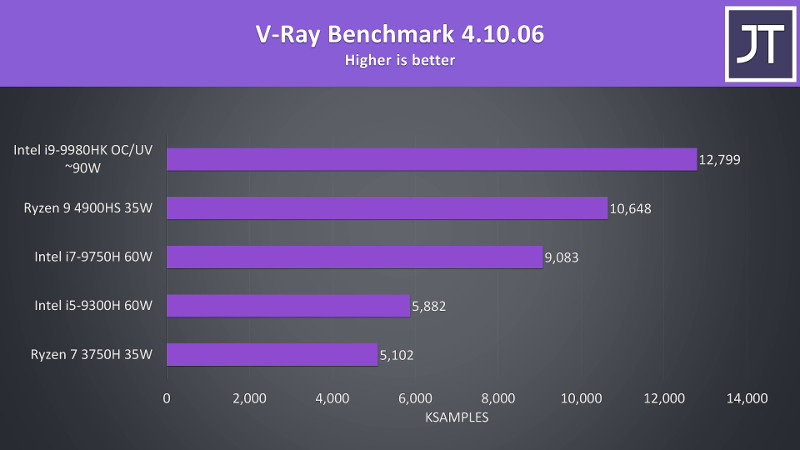 V-Ray is another multicore test, this time the i9 was scoring about 20% higher than the 4900HS, while the 4900HS is about 17% faster than the i7-9750H. Again when you consider the 4900HS is a smaller 14 inch laptop with a 35 watt limit, the results look quite promising for the Ryzen processor. 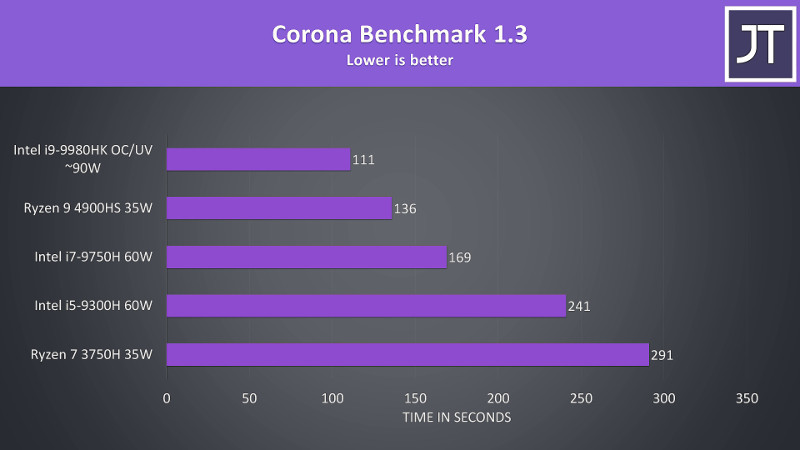 Another benchmark that uses the CPU to render out a scene, the results were similar with the i9 about 22% faster in this test, while the 4900HS was about 24% faster than the 6 core i7-9750H. 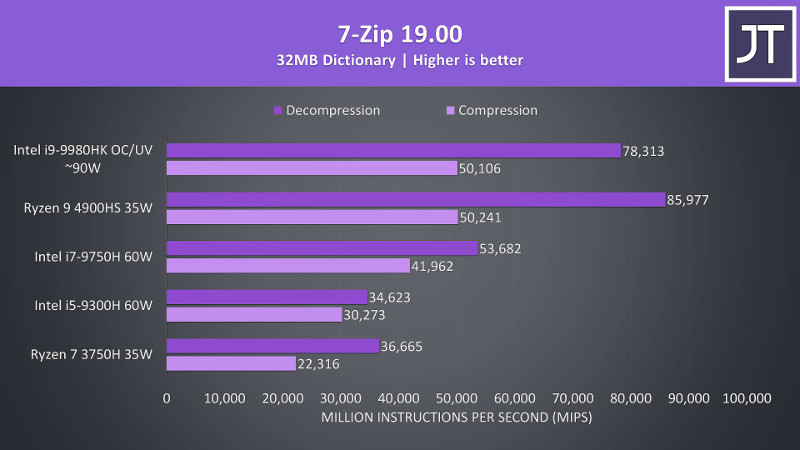 7-Zip was used to test compression and decompression speeds, and the 4900HS was ahead in both regards. Well the compression score was very close to the i9, however when it came to decompression, the 4900HS is almost 10% faster than the i9. AMD have traditionally done very well in this test though, as you can see even the 3750H down the bottom beats the i5-9300H in decompression, where the i5 was otherwise winning in all other workloads tested. 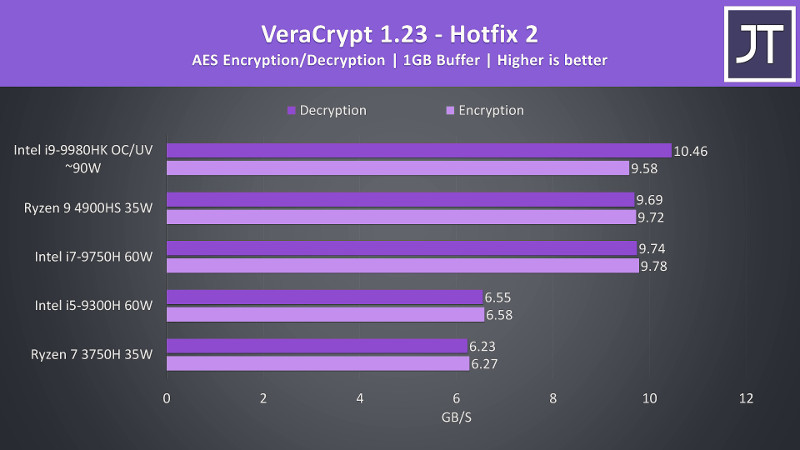 Veracrypt was used to test AES encryption and decryption speeds. This test may not be the most accurate as results can vary between test run, which is why I’ve taken the average of 10 runs here. The 4900HS was close to the i7, and I’ve actually generally found overclocking to negatively affect results in this test for some reason, which may be why the encryption speed from the i9 is below even that of the i7. 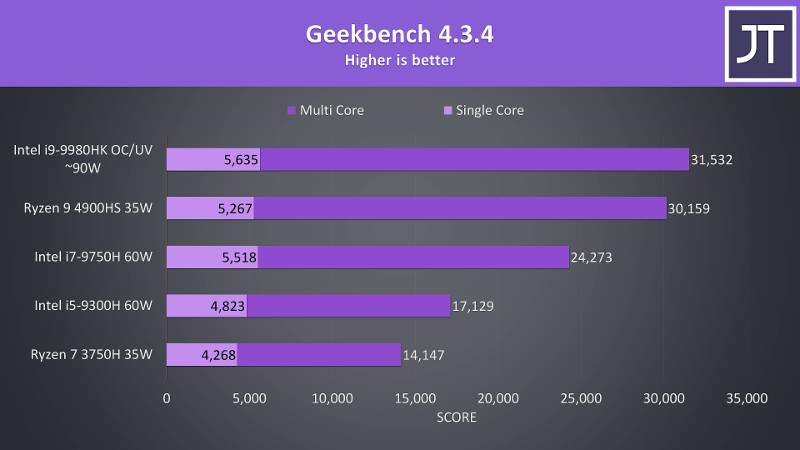 In the Geekbench test the 4900HS was a little behind even the i7 in the single core test, not sure what the deal is here as it was ahead in others like Cinebench, I am using an older version of Geekbench as this is what I have historic data for, I’ll move over to the newer version 5 soon. In any case, the i7 was almost 5% ahead of the 4900HS in single core performance, while the i9 had a 7% lead. For multicore though, the i9 was only scoring 4.5% ahead of the Ryzen 9. 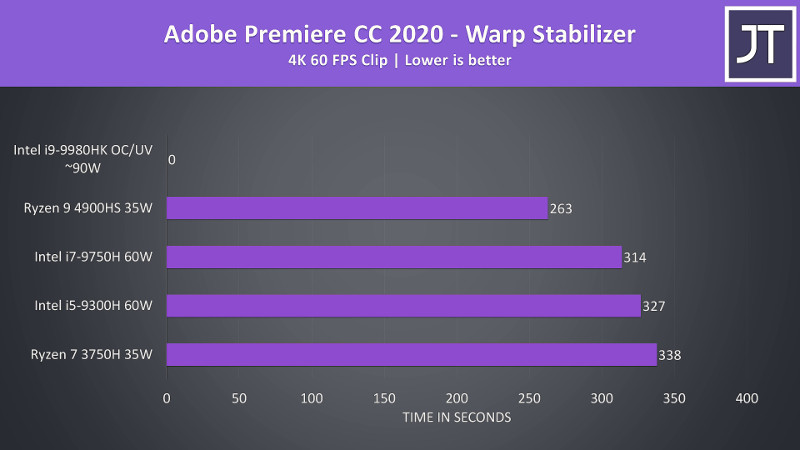 I’ve used Adobe Premiere’s warp stabilizer effect which is a single core test, unfortunately I didn’t test out the i9 when I had the machine here, so no data for it, however the 4900HS was 19% faster than the 9750H in this workload which I found interesting, that’s a pretty big lead against Intel, who again have historically been known for superior single core results. 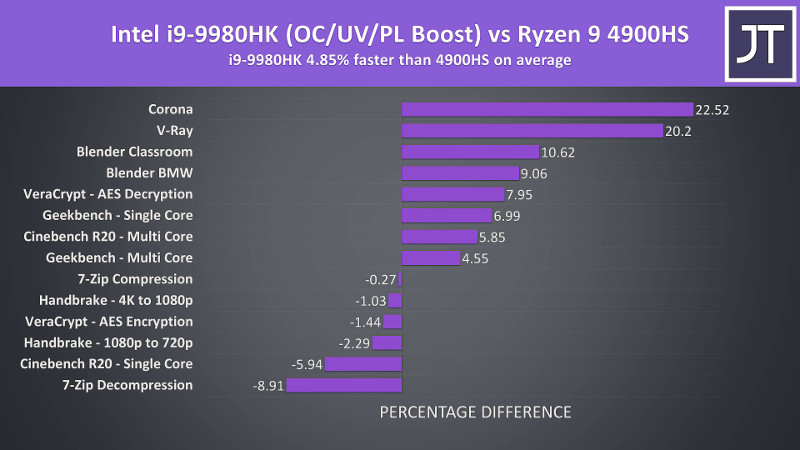 These are the average differences between the Intel i9-9980HK and AMD Ryzen 9 4900HS out of the tests that I have data for both. On average the i9 was almost 5% faster, however that overall percentage isn’t too useful as it includes both single and multicore tests. Either way though, in general there’s not that big of a difference, the i9 seems to have the most advantage in the core heavy rendering workloads which dominate the top 4 results. 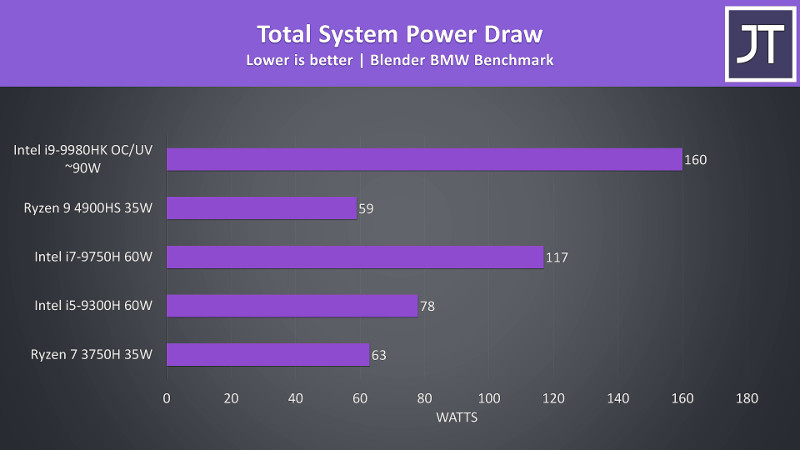 Here’s where things get interesting, this is what the total system power draw from the wall looked like when running the blender benchmark. The 4900HS laptop was using less power in this test than even the two quad core systems. The i9-9980HK has blown up because I’ve raised the power limit and overclocked it to increase performance above stock, and power efficiency tends to get worse the higher you go. Anyway although the i9 was winning in most tests, consider that in Blender it was only about 10% faster than the 4900HS, but it was using more than double the power to achieve this. The 4900HS would likely have no issue beating the i9 at stock if I wasn’t undervolting and boosting the power limit, this really goes to show how efficient AMD’s 7nm processors are. 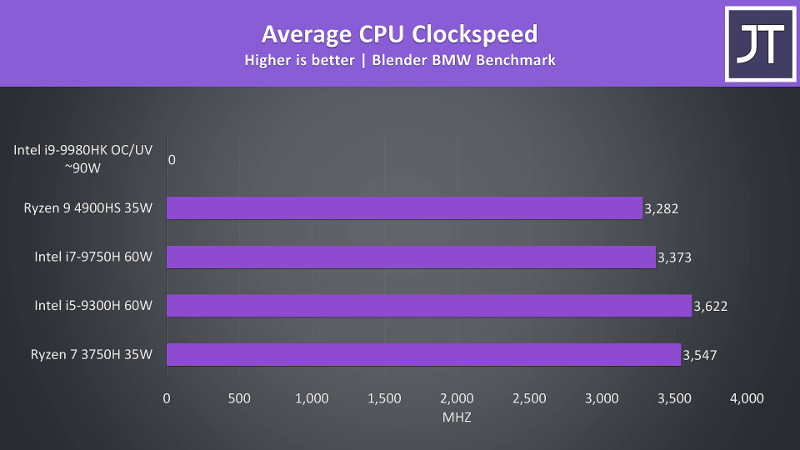 These are the average clock speeds during the same blender test, unfortunately I didn’t record this data back when I had the i9 for testing, but I still thought it was interesting that the 4900HS was clocking lower out of these options while also destroying them as a result of the higher core and thread count. 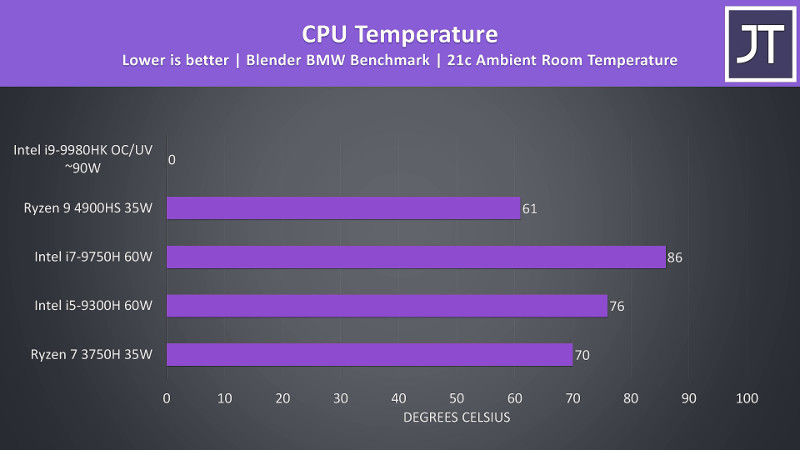 Likewise with the temps, no data from the i9, but trust me it would be well up there. In any case, the 35 watt 4900HS was running cooler than the other three machines, and remember the Ryzen processor is in a smaller 14 inch chassis here, my 9750H, 9300H and 3750H are all 15 inch machines.

Unfortunately there are no gaming results at this time as all of the laptops tested had different graphics cards so it wasn’t possible to fairly compare, however I’ll try and do this in the future if I’m able to get my hands on comparable machines. It seems pretty clear to me that AMD finally have a competitive mobile option on their hands.

Seriously, my 4900HS is in a smaller 14 inch (35.56 cm) chassis compared to the i9 which only exists in 15 inch (38.1 cm) but more commonly 17-inch laptops, the Ryzen option uses less power and still offers high levels of performance in most workloads, and it’s also a fair bit cheaper. The G14 I’ve tested with here goes for about $1450 USD, good luck finding any i9 laptop anywhere near that price if you need CPU processing done.

Although Intel’s 10th gen isn’t too far away, I’m not expecting big changes being that it’s still on the 14 nm I’ve lost track of the plusses architecture. Let me know what you thought of the performance from the 4900HS down in the comments. I can’t wait to test out the other new Ryzen processors and see how they stack up against say the Intel i7-9750H.