How Long Does SEO Take to Work For a New Website? 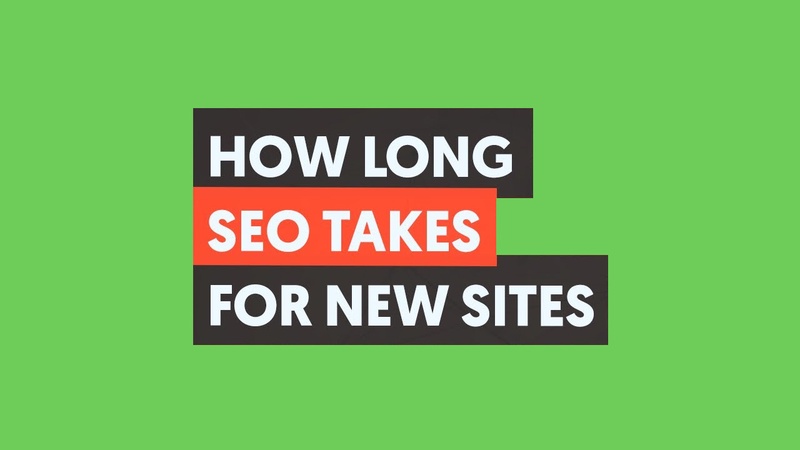 This is by far my most frequently asked question that I get, "Hey, my website is new and I'm still "not seeing a lot of visitors. "How long before I start seeing results from my SEO effort?" When you're putting all this time and effort into making your website to get to the top, you're anxious, you want to see results right away, don't you?

SEO used to be easy and following a specific formula would get you to the top of page one, and in many cases when I share my SEO journey, back in the day I could get a top of page one in a few months, maybe even six months at the latest for the head terms, they were like auto insurance and credit cards. But nowadays SEO is super competitive, there's over a billion blogs on the web, there's roughly one blog for every seven people, and there's even more websites on the web, so when you combine all of that, it makes sense on why SEO is so hard, because now Google has its prime pickings to figure out which website they're going to place on top. In other words, they can be super picky, while five, 10 years ago they couldn't be as picky. So first, let's start by seeing how SEO has changed over the years.

This is one of the big areas. This wasn't nearly as competitive a market as it used to be. There're literally thousands of websites, if not millions of websites created every single day. As of January 1st, there're over 1.7 billion websites online. That's a lot of competition. It used to be that you could focus on five or six keywords, maybe even ten, and those keywords would bring in most of your site traffic. Companies used to be able to focus on small groups of generic keywords and see great results. The reality now is, it's a lot different. Websites now must have a list of 50 to 100 keywords or more depending on the site. And at bare minimum each page on your site is going to need to be targeted at least at one keyword. However, in most cases actually three or four keywords per page.

It used to be that you can simply write an article and implement the keyword a fair number of times and Google automatically would rank you, a.k.a. QR density, right? The more you put the keyword in your page, the more they know about that page is around that topic and then you're ranked. Now that doesn't necessarily flow naturally and it didn't really work well for users, hence Google doesn't look at density the same way anymore. Google has gotten smarter, and they changed their expectations a bit. They're not just looking at a site shoving in the same keyword and stuffing it and ruining the searchers' experience. They made some big changes to improve their rankings by not showing low-quality content as high. So now when you're writing content, it's not about that keyword in there, naturally it'll be in there and other synonyms will be which Google can tell, because think of them as a big dictionary and thesaurus. So they know what the article is about even if you don't have that keyword in there.

Their main priority is to deliver a high quality content and keeping the search intent in mind. Remember when someone types in a search query it is usually a question, right? It's not necessarily specifically a question with a question mark, but when someone does a Google search they're looking for an answer to what ever they typed in, and if your page does that, provides that answer with that content you're in the good graces, if you don't, you're not going to do well.

So don't just shove in keywords within your content and write long pieces of article because, hey, people say Google wants 2,000-word article ranked at the top. It's not about word count. It's about providing what the users are looking for as quick as possible. If you do in 500 words, 2,000 words, 5,000 words, whatever it may be, whoever does it in the easiest form for the user, without shoving in keywords, and creating the best experience is who's going to do well and the best in the long run.

How long does it take to rank on Google?

Well, are you ready for this? The answer is it depends. I know it's frustrating, right. According to Forbes, the average it takes for a new site is four to six months to start seeing some traction in service. However, because there're so many factors in SEO, there is no definitive answer. Every industry is different as well. It's easier to rank for a plumber in a localized city, than it is to rank for auto insurance nationally. On average, based on my experience, even if you're starting a new website and you're actively working on your content, on page SEO and link building, it can take roughly six months before you start seeing results. It doesn't mean in six months you're going to rank at the top and get what you want, but it usually takes six months to start seeing traction. And the best way to start seeing the traction faster is going after the long tail phrases which convert better than head terms.

The first thing we should look at is your site and is it secure and is it accessible to Google crawlers. Are you using HTTPS? Is your robots.txt blocking the right pages, allowing the access to the right ones? Using a site map and submitting it to Google Webmaster tool, so Google can crawl on your pages? Is your website fast in load time? If it's fast, not only it's going to boost your rankings, because it's a part of their algorithm, and then you get to use Google PageSpeed to see how fast your website loads, both on mobile and desktop device, and they'll tell you what to fix as well. But mobile speed time and desktop speed time also affect conversions as well.

The other thing that you need to look at is, is your site mobile-friendly? Did you know that over a half of searches on Google are done by mobile devices? If your website doesn't look nice on a mobile device, like iPhone or Android device, don't expect them to rank it high up.

Not everything has been written even though there's been over a billion blogs on the web. Another thing you need to look at is quality backlinks. Getting links from authoritative sites is one thing, if those sites are emulated you're not going to do as well. Are you creating an amazing enough content to attract right type of links? Are you creating amazing product and service to get more links? Do you know what section of my site gets more links than any other? It's actually Ubersuggest. Did you know I generated over 10,000 backlinks alone just to Ubersuggest? I'm not going out there asking people for links, they're just linking to me and it's attracting them.

Another thing I want you to look at is social signals. Even though social signals have no effect on ranking according to Google, there is a correlation between pages that rank high and have a decent number of social signals. Remember, Google wants to rank pages at the top that people love. So if people love a page, they're more likely to link to it. They're more likely to share it on the social web, right? They wouldn't just say, "Hey, I'm going to link to it, but I would never share it." They go hand in hand. The other thing that you need to look at is do you have your business information listed. Especially if you're a local business. You need to claim your Google My Business profile, you need Yelp reviews, Google reviews, have a good Better Business Bureau page. The more reviews you can attract the better off you are. The big takeaway is, when you do the right things and you go above and beyond and put the user first, you're going to rank faster, than if you just try to optimize your page for Google and not put the user first.