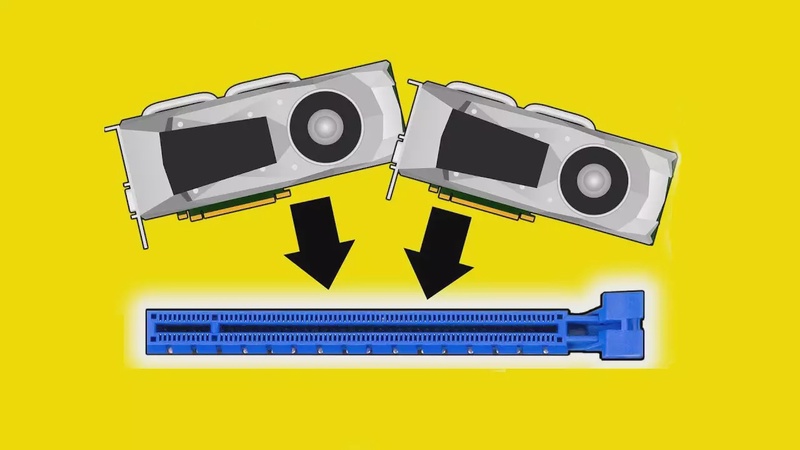 Bifurcation. It's fancy word that means to split something into two, and today we're gonna talk about bifurcating something that isn't a sandwich, a sporting event or a marriage. This article is all about PCI Express bifurcation.

This is exactly what it sounds like: Taking a PCI Express slot and chopping it up so that you can use multiple devices inside of it. But how does that work? I mean, you can't exactly shove two graphics cards in one slot. To answer, we reached out to Philip Maher from Tyan, and we'd like to thank him for his contributions.

So the thing to keep in mind here is how PCI Express lanes are configured on modern platforms. Your CPU has a certain number of controllers, and each one can only support one device. For example, even though a current Intel CPU supports 16 lanes, it's split up with four controllers controlling four lanes each, meaning you can connect a maximum of four PCI Express devices.

Of course, you can connect one graphics card and use all 16 lanes and just call it a day. But let's say that you want to use multiple PCI Express storage devices, like NVMe solid-state drives. This is where bifurcation comes in.

You see, one of the most common uses of bifurcation is when you want to connect several M.2 drives to a single PCI Express slot. This can be done using a fancy card, but here's the kicker. If you're going to chop up just one slot, you need to tell your motherboard, inside the BIOS, exactly how to divvy up those lanes. Otherwise, it's just going to see one of those four devices and you're gonna regret spending the money.

How exactly you split up these lanes depends on what platform you're using. As mentioned earlier, the most you can do on a mainstream Intel platform is four devices with four lanes each. But on a server platform like AMD EPYC, you might get something like eight devices, albeit with just two lanes each, if you use that many.

Bifurcation is a lot more common in enterprise settings, as data centers tend to use PCE Express lanes for things that you just wouldn't find at home, such as FPGAs and ASICs, chips and devices that can be highly customized to work on very specific kinds of operations. But that doesn't mean that there aren't additional uses for PCI Expresses bifurcation at home, like running two graphics cards in one slot.

Although it's common for gamers to run just one graphics card at x16 speed, running a card at x8 will make virtually no difference to your performance, as even high-end modern cards don't move enough data to really need those extra lanes. Obviously, if you have a board with two free full-length PCI Express slots, the lanes are automatically divvied up by a switch called a mux chip, so that each card runs at x8 speed. But there's actually nothing stopping you from sticking a two-slot riser card into your PCI Express x16 slot, plugging in two graphics cards with the help of riser cables, and telling your BIOS to bifurcate the slot into two x8 connections. Just think, you could run NVLink on a one-slot Mini-ITX board, assuming you could find a way to mount the cards in your case, so hopefully you don't mind using duct tape.

But if you're interested in using PCI Express bifurcation, regardless of what exactly you'll be plugging in, you need to verify that your motherboard and BIOS support it. Not all motherboards allow you to enable it in the BIOS, and if that's the case, it's pretty much a show stopper. So do your research before you decide to turn your home rig into some sort of crazy science experiment.