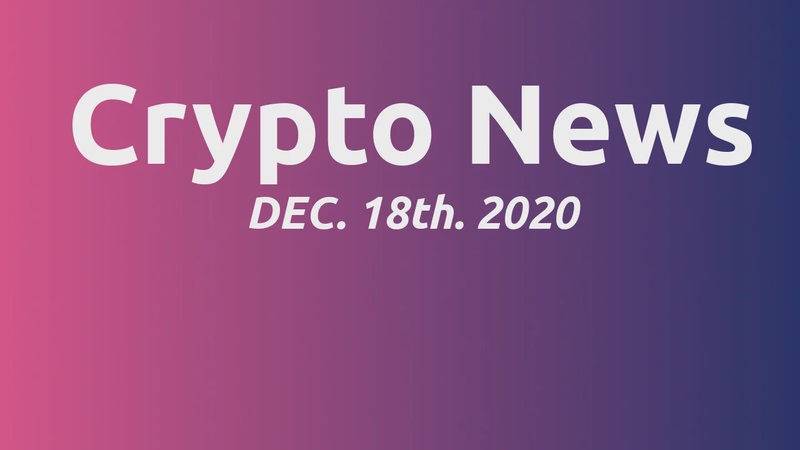 It’s that time of year again, the glorious moment  when Bitcoin breaks its previous all time high and   crypto investors start looking at Lamborghini  color swatches. Heated arguments break out   all over the internet as hodlers argue whether  Italian supercars look better in black or orange.

It’s not all about Bitcoin though! This week  we’ve got some bullish news for altcoins too.   The Bitcoin dominance chart suggests an  upcoming alt season, XRP is trading in   record volumes and more than $1 billion has been  locked up in the Ethereum staking contract.

These days it’s not so easy to be an altcoin  investor.

Bitcoin is off to the races, smashing   through $20k like nothing and yet the altcoins  just keep lagging behind. Ethereum is still 50%   below its all time high while other popular coins  like XRP and Monero are even further behind.  It’s a tough game but we’re starting to see a  few signs that it won’t stay this way forever.

For one thing, the BTCD charts are telling us  that there might be an alt season on the horizon.  BTCD chart stands for Bitcoin Dominance,   which measures what percentage of the crypto  market Bitcoin accounts for. In other words,   the market cap for Bitcoin, versus the  market cap for all other coins combined.

There is a big resistance zone at  67% on the BTCD chart and Bitcoin   seems to be unable to break through that,  suggesting that Bitcoin dominance isn’t going   to be rising. If BTCD keeps rejecting these  higher levels the most likely scenario is   that it’s going to roll over, which  would be bullish for altcoins.

Also, it’s encouraging to remember  that at the start of 2017 the alt coins   didn’t start their own epic bull run until after  Bitcoin had broken its previous all time high.

So if the same thing happens again, then Bitcoin  breaking through $20k could be super bullish   for altcoins in the coming weeks and months.

When the ETH 2.0 staking contract was released   there was actually a lot of uncertainty  about how long it would take to get all of   the ETH needed for the contract to go live. The  contract needed stakers to deposit about $500   million worth of ETH and at first the deposits came in really slow. Then, the flood happened and   in just a matter of days the Ethereum 2.0 staking  contract got all of the ETH it needed to go live.  Looking back now it seems sort of silly that  we ever worried about getting enough ETH,   since there’s now $1 billion worth of  Ethereum locked up in the staking contract!

One of the macro forces that’s driving so much  money into Ethereum staking is a lack of yield   all over the world. For example there are  currently $17 trillion worth of negative   yielding bonds in the world. In simple terms what  this means is that, there are $17 trillion worth   of financial instruments that are GUARANTEED to  pay you back less money than what you put in.  It’s a pretty crazy situation, and it’s got investors looking   for alternative assets they can buy.  Staking Ethereum currently offers a   ROI of more than 10% which is definitely one  of the reasons so many people want to stake.

Objectively speaking, the XRP price has not done  well in the bear market. XRP was way down against   the dollar, but it was also down when measured against   Bitcoin. XRP hodlers definitely weren’t  having much fun through this bear market,   but there is finally some  sunshine on the horizon!  In the last couple of months XRP has  been absolutely crushing it. Just a   day or two ago XRP was up by 26% in 24 hours, but   even that is peanuts compared to some price  action from a few weeks ago, when XRP was   up almost 50% in a day!

Zoom out a bit to the  90 day chart and XRP is up a beautiful 125%.  All of these gains are happening on top of huge  trading volume. In the last 24 hours almost $20   billion worth of XRP has changed hands, which  is basically double the trading volume that   we’ve seen up to this point so far.

All of this  volume tells us that a lot of new buyers are   getting super interested in XRP, which is  definitely a good sign for long time investors.  Even though XRP is still a ways off from its  previous high, if this trading volume keeps   up it won’t be long before  XRP gets back to its peak.

Forkast.news, working with the AAX  exchange, have released a new report which   estimates that as of the end of 2020 there  are more than $20 billion dollars worth   of tokenized assets. More than anything else  it’s stablecoins that are dominating this market,   with just Tether alone having nearly a  $20 billion dollar market cap. USDC is   in a much smaller second place, with  a market cap of about $3.5 billion.  It’s not just stablecoins that are  getting all of the attention though.   You can use the blockchain to tokenize just about  anything, including commodities, securities,   bonds, real estate and of course  other currencies besides the dollar.  Tokenized assets are just so superior to  everything else that it’s pretty obvious   that they’re going to keep eating the  world. That’s good news for everyone,   and especially good for crypto holders as  they’ll have even more assets to invest in.  Institutional investment is one of the key drivers   of this move in Bitcoin and it doesn’t  seem like the buying is slowing down.

Just in the last week or two we’ve heard  that MicroStrategy will be buying another   $650 million worth of BTC, the asset management  company Ruffers announced a nice little $744   million dollar purchase, MassMutual bought a cool  $100 million worth of BTC and One River Asset   Management just launched a crypto fund that will  accumulate $1 billion worth of crypto by 2021.  Institutions are buying up Bitcoin so fast that  it’s hard to even keep track of it all. And don’t   forget, all we’re hearing about are the companies  and investment funds that are choosing to make an   announcement! Who knows how many private companies  and funds are buying BTC without telling anyone.

Not to get too bullish but the best way to end  this week’s news is to point out that Scott   Minerd, Chief Investment Officer  of the Guggenheim investment fund,   has called for a $400,000 Bitcoin value.  If this is where institutional buyers   think that Bitcoin is headed, well,  who are we to say they’re wrong.   As a matter of fact, here are some predictions for the next year from some of our YouTube viewers.

Where do you think Bitcoin's headed? Let us know in the comments below.