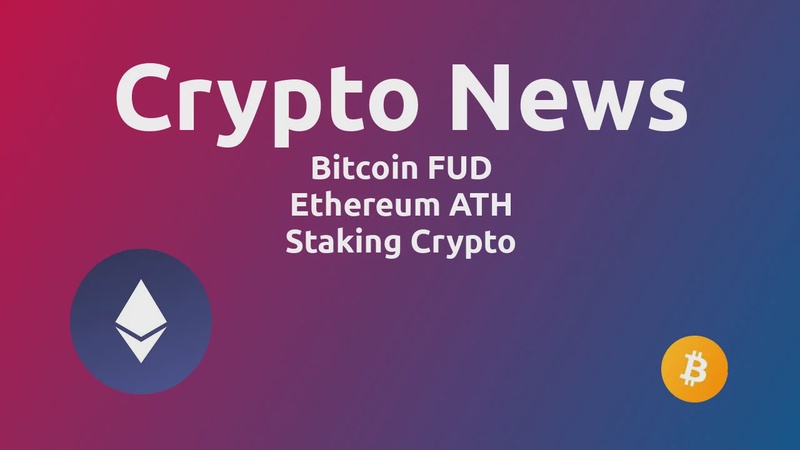 For the first time in months the  crypto markets are noticeably down.   Bitcoin had a quick correction to just  below $30,000 and Ethereum, which was   hanging out around its previous all time high,  has given up a few hundred dollars of gains.  Sad as it may be, this dip isn’t all bad news.

Blackrock is getting into Bitcoin, a supposed  double spend ended up being more FUD than reality,   and crypto staking continues to be a popular way  for crypto investors to make money.

The   biggest news of the week is that Blackrock, one  of the largest institutional investment firms   in the world, has indicated that  they’re interested in trading Bitcoin.  The investment firm has more than  7 trillion dollars in assets under   management and their entrance into crypto  would add another layer of legitimacy.

Remember, it’s not like Blackrock is  some longtime fan of the orange coin.  In 2018 Larry Fink, the CEO  of Blackrock, said, quote,  “I don’t believe any client  has sought out crypto exposure.   Right now I can tell you, worldwide, I have not  from one client who said ‘I need to be in this.’” How times change… From skeptical in 2018 to buying  Bitcoin futures in 2021. That’s the plan anyways,   as Blockrock has mentioned that they’ll be  getting exposure to BTC via the futures market.

That’s a good start, but if Blackrock’s ultimate  goal is to protect the purchasing power of   their client’s funds, maybe they’ll  start buying BTC later in the year.   We’ll keep an eye on it and let  you know as the story develops.

Speaking of developing stories,  recently there has been some FUD   about a potential double spend on the Bitcoin  network. A double spend would be a flaw in which   a single coin can be spent more than once. For  example, I have only one bitcoin in my wallet,   but somehow I’m able to send that  one coin twice as if had two coins As we’ve come to expect, Bitcoin critics were  quick to pronounce the death of the network.  However, there’s a lot more to the story than  the critics would have you believe.

It’s true   that a duplicate set of coins from the same  wallet ended up in two different blocks,   however, that doesn’t mean  a double spend took place.  Only one of those blocks was accepted  as valid by the Bitcoin network, and   the other block was discarded. The technical  details here are beyond the scope of this article   to explain however this block reorganization  is a fairly normal occurrence with Bitcoin and   no cause for alarm.

The fact that so many  people found it FUD-worthy is probably a good   indication that there are a lot  of new Bitcoin investors who don’t   understand how the network works and added  to the quick drawback of the BTC price.

As we already alluded to,  Ethereum finally broke its   previous all time high. On January  19th of this year, ETH hit $1,432.   A new record! Etherians everywhere have been  waiting for this to happen for about 3 years,   especially since Bitcoin more than doubled  its previous all time high at one point.  This price growth comes on the back of  an expanding DeFi ecosystem and last   year’s rollout of staking. Even though  the first stage of ETH 2.0 launched   just a few months ago, there are already  2 million ETH being staked which is about   2% of all Ether in existence. That’s really  good to see, and once staking withdrawals   are enabled we’ll probably see the amount  of staked ETH really take off.

So besides Ethereum there are lots of  different cryptocurrencies that support   staking. In fact, 2020 was a great year  for earning a passive income with staking.  The cryptocurrency infrastructure firm Staked  has estimated that investors earned more than $20   billion in rewards for staking in 2020.  That’s a fairly significant return once   you consider that for much of 2020 the total  crypto market cap was only about $300 billion.

That means that staking returned about 8%  of the total crypto market cap last year.  Furthermore, Staked has predicted that 2021  is going to be even better for Proof of Stake   cryptocurrencies. Twenty-five percent of  the top 100 most valuable cryptocurrencies   are all using a Proof of Stake consensus  mechanism. As crypto prices increase,   the returns that investors can get by staking  coins in these networks will also grow.  Why is staking so popular?  For one thing, many people consider  staking to be more energy efficient   than the mining process bitcoin uses.

Mining requires a lot of energy to power,   whereas staking just requires a laptop  and a reliable internet connection.   Another factor is that it’s easier to stake  than mine. Investors can buy some crypto,   like Ethereum, and start staking that same day.  The final factor is that staking can offer a  really good return! Staked has estimated that   the average return for staking is 11.2% per  year. That’s a great return, especially when   you consider how few opportunities there are to  earn a good return in the traditional markets.  So crypto continues to grow. Whether it’s  Blackrock getting into the Bitcoin game,   or Ethereum breaking its previous all time high,   blockchain technology is showing  the world what it’s got.  Wherever you are, whether it’s  Barcelona, Budapest or Boston,   we hope you have a great weekend  and keep stacking those sats.