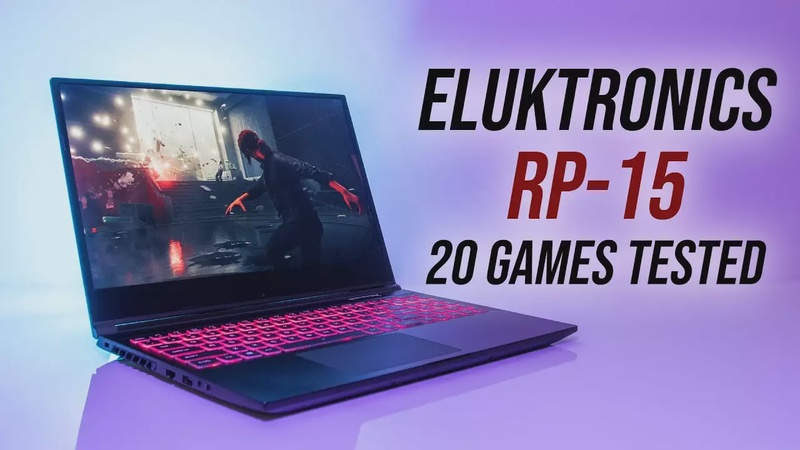 The Eluktronics RP-15 is a Ryzen based gaming laptop with some impressive performance on offer for the price, I’m going to show you how it performs in 20 different games and also compare it against other laptops.

These are all the specs of my RP-15, so some good options for a gaming laptop which starts from around $1140 USD.

The Gaming Center software lets you select between different performance modes, I’ve used the highest turbo mode with maximum fan speed for best performance. This is what triggers eluktroboost, and should allow the RTX 2060 to run above it’s stock 90 watt limit up to 110 watts, however no GPU overclocking was applied by default, and there’s no option to disable the iGPU. We’ll only be covering gaming performance in this review.

Let’s start out by going through all games at all setting levels, then afterwards we’ll see how the RP-15 compares against some other laptops and also test screen response time.

Red Dead Redemption 2 was tested using the game’s built in benchmark tool, and while this test is tough on most laptops at max settings, I noticed the 115 watt 2060 in the MSI GL65 I recently tested was still able to hit 70 FPS at high settings, though there is also a CPU difference there.

Battlefield 5 was tested in campaign mode, again the results were a bit lower compared to the in theory similar wattage 2060 in the GL65, but we’ll take a look at how the RP-15 and others compare in this title later.

Control was tested with and without RTX enabled. I’ve got the results with RTX off in purple, RTX on in the green bars which is much worse, then RTX on with DLSS enabled as shown by the red bars, which was still playing quite well and looking nice.

Shadow of the Tomb Raider was tested with the built in benchmark, this is another title we’ll use to compare with some others, but either way still easily above 60 FPS with max settings.

Apex Legends was tested with either all settings at maximum, or all settings on the lowest possible values, as it doesn’t have predefined setting presets. Above 100 FPS was easy even with all settings maxed out, and there were big gains at minimum, where even 1% lows were above the refresh rate of the screen.

Call of Duty Modern Warfare was tested in campaign mode, and I’ve also tested it with the settings either maxed out or at minimum for the same reason, though there was less of a difference between them compared to Apex, still no issues playing though.

Borderlands 3 was tested using the game’s built in benchmark, and we’re around 60 FPS at max settings, so not a bad result.

Ghost Recon Breakpoint was also tested with the benchmark tool, in this test ultra settings were needed to score above 60 FPS, couldn’t quite get there maxed out.

Fortnite was tested with the replay feature, high settings was producing average FPS similar to the screens refresh rate, while the highest epic preset was still above 100 FPS.

Overwatch is another less demanding game and was tested in the practice range. This time even maxed out the average frame rate was above the screens refresh rate, while just one level lower pushed the 1% low above too.

CS:GO was tested using the Ulletical FPS benchmark, and while the performance is plenty for this game, I have noticed that Intel processors still seem to have a little edge in this test.

Dota 2 was tested playing in the middle lane, and the results are similar to most laptops that I test, the game literally runs on a potato, so moving on.

Rainbow Six Siege was tested with the built in benchmark using Vulkan, there were only minor differences between high and ultra settings here, but even maxed out the average frame rate is higher than the screen’s refresh rate, always a good sign.

The Division 2 was also tested with the built in benchmark, and 60 FPS at the highest ultra setting preset seems fair for another more demanding title.

Monster Hunter World was tested running through the main town, it was doing well even with highest settings, the 1% low isn’t far behind the average, so minimal dips in performance, but that just seems to be an attribute of this game.

Assassin’s Creed Odyssey was tested with the built in benchmark, very high settings was close to the 60 FPS mark, but I don’t think this title benefits too much from super high frame rates.

Far Cry New Dawn was also tested with the games benchmark, there’s not really much to say, so let’s keep on moving.

The Witcher 3 was playing well even at the highest ultra setting preset, but as is often the case with this game, it was possible to boost the frame rate a fair bit by going just one level lower, where even the 1% low at high is near the average of ultra.

F1 2019 was tested using the game’s benchmark tool, again the frame rate at maximum is quite good, but much higher is possible just one level down, then there’s diminishing returns to be had by lowering further.

Let’s also take a look at how the RP-15 compares with other laptops, use these results as a rough guide only as they were tested at different times with different drivers.

In Battlefield 5 I’ve got the RP-15 highlighted in red.

What I found most interesting was that the ASUS TUF A15 with the same CPU but lower wattage GPU was a few frames ahead. I mean it’s not enough to make a difference you’d actually be able to notice while playing, but the RP-15 should technically be able to pull more power to the GPU.

The average frame rates in Far Cry 5, which was tested with the games benchmark tool, were ahead of the A15 this time, though the 115 watt 2060 in the MSI GL65 was ahead, however there is also a processor difference there. The 1% low from the RP-15 was above most of the other machines, as the CPU performance in this machine is excellent, as you’ll see shortly.

The TUF A15 with same CPU and GPU was just 1 FPS ahead now, again not a difference you’d care about in a practical sense, however the result still doesn’t make much sense to me given the GPU power differences, especially as this is a GPU heavy test.

There was some thermal throttling on the GPU in the RP-15 with eluktroboost on when both the processor and graphics are being smashed, but I’ll investigate that more in the upcoming thermal testing.

Overall the gaming performance from the Eluktronics RP-15 is good, but the boosted RTX 2060 wasn’t quite doing as well as I expected when considering it’s higher potential power limit, as we saw when looking at how it compared against other 90 watt 2060 laptops.

I asked Eluktronics why they chose to use the 90 watt RTX 2060 and boost it up to 110 watts with Eluktroboost, rather than just using the new 115 watt version that Nvidia offers. They said that there was little difference in performance due to the 5 watt difference and the costs were the same, and this tradeoff allows more power for the CPU.

Sure enough, just quickly if we check out the differences in Cinebench

the RP-15 is offering the best result from a 4800H that I’ve ever seen, scoring around 10% higher in multicore over the next best 4800H laptop I’ve tested which is honestly quite impressive, so CPU performance is definitely there.

Here are the screen response time results for the 1080p 144Hz screen.

Basically the average grey to grey response time is around 5ms, and we can see how this compares against other gaming laptops that I’ve tested so far, it’s one of the better options that I’ve tested.

Unfortunately there’s no FreeSync here, which seems to be present in most other Ryzen based laptops, granted those typically have worse screens, like the ASUS TUF A15, so that seems to be the trade off. Let me know what you thought of the gaming performance from the Eluktronics RP-15 gaming laptop down in the comments.