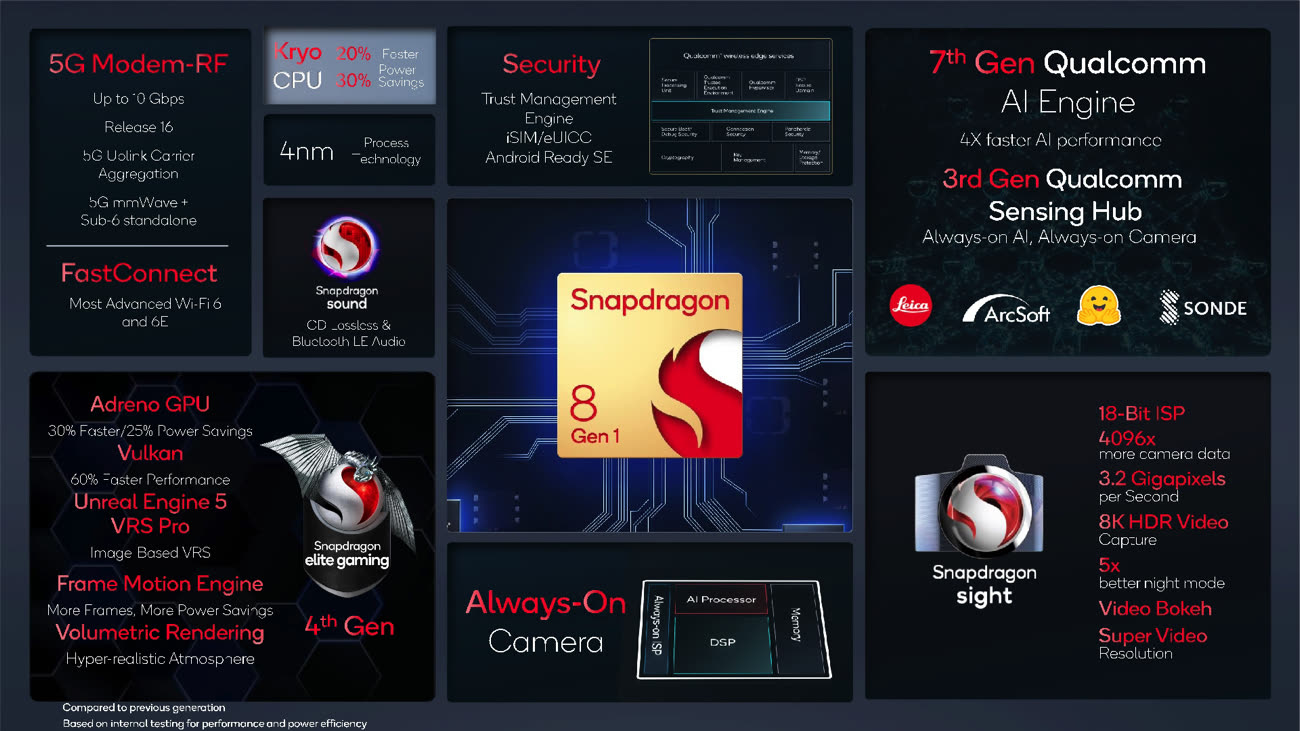 About the New Generation of Snapdragon 8 Soc

The 3rd-generation Snapdragon 8cx platform for computing is the first Windows PC platform for 5nm process that can achieve up to an 85% improvement in intergenerational performance with up to 60% power efficiency per watt improvements compared to the x86-based platforms of competitors.

That means Windows PC with 8cx can get better performance over time while retaining high performance. Its Snapdragon 8 Gen 1 phone, which launched the year before, has the built-in Qualcomm the X605G Modem and is the first mobile phone to incorporate a 5G Modem apart from Kirin. The new Snapdragon 8 Generation 1 features an updated X65 5G Modem which improves the performance to the next level.

The Snapdragon X65 5G Modem was announced in the first quarter of this year. The maximum speed has been raised to 10Gbps and the frequency of the band 6GHz is increased to 200MHz and 300MHz. The millimeter-wave bandwidth available has been increased from 800MHz to 1000MHz, which increases the total spectrum available. The X65 is also able to support upgrades, expansions, and customizing across the 5G market segments and also new technologies to reduce power consumption as defined by 3GPP Version 16.

Regarding AI the latest Snapdragon 8Gen 1 performance in tensors and shared memory has been increased by 2 times as much, and the combination of hardware aaznd software enhancements have resulted in a four-fold increase in performance compared to Snapdragon 888. It supports 24x7 round-the-clock contextual awareness and a continuous switch to the camera to avoid looking. In conjunction together with SONDE, Snapdragon 8 Gen 1 will be able to detect health-related dangers by listening to users' voice patterns.

About the New Generation of Snapdragon 7c +

This 3rd-generation Snapdragon 7c+ computing platform is targeted at basic products, using 6nm technology, and is specifically designed for users of the Windows PC and Chromebook ecosystems. When compared to earlier versions of the platform CPU performance has been improved by as much as 60% and the graphics processing speed is increased by as much as 70 percent.

The third-gen Snapdragon 7c+ computing platform added 5G technology to its basic platform at first, elevating the standards of connectivity for consumers using budget devices. Its integrated Snapdragon 5G modem X53 and RF system supports 5G Sub-6GHz and millimeter wave, which can achieve download speeds of up to 3.7Gbps.

About the global shortages in semiconductor capacity Mobile chips are vital to the mobile phone industry as well. Qualcomm is the top player in the high-end global mobile chip industry. Therefore, the launch of the flagship mobile platform of Qualcomm is extremely important to the advancement of the entire mobile hardware market.

It is worth noting that Qualcomm has also explicitly mentioned meta-universe as a concept at the press event. According to Qualcomm meta-universe will launch across all sorts of devices that are smart shortly and the foundational components of the devices are built on mobile technologies, which include AI games, imaging security. These are areas that Qualcomm is working on.

Following the press conference, Zhidong also had in-depth discussions with the top executives who are responsible for Qualcomm products including technologies, games, and other products at the beginning of the year and also explored the numerous "cool techs" behind the Snapdragon 8 mobile platform. It is possible to say that the release of the Snapdragon 8 could trigger an exciting new era of innovations in the realm of mobile technology.